The use of next-generation sequencing for transcriptome analysis in clinical and applied spaces requires accurate, parallel processing of large numbers of single cells. Several platforms have emerged to meet this need but variations in the underlying technology—such as microfluidics, droplet encapsulation, or multisample nanodispensing—influence how the single cells are captured and processed. What are the differences between these platforms, and how do they impact your data?

A head-to-head performance comparison can help determine which systems to trust for your single-cell RNA-seq (scRNA-seq) experiments. The Association of Biomolecular Resource Facilities (ABRF) Genomics Research Group (GRG) performed a comprehensive study to evaluate platforms from Fluidigm, 10X Genomics, Illumina Bio-Rad, and Takara Bio. They presented their in-depth results at the ABRF 2018 conference in a poster titled "Comparative analysis of single-cell RNA sequencing platforms and methods."

The ABRF GRG generated data from hundreds of individual SUM149PT cells (breast cancer cell line) treated with the histone deacetylase inhibitor TSA or vehicle control (DMSO). Single cells were captured and libraries prepared using each platform's technology. Bulk RNA-seq was performed on a subset of cells from each treatment condition.

As the only system to utilize a nanodispensing array, the Takara Bio ICELL8 system enables high-throughput processing of hundreds of single cells in a heterogeneous population without the common microfluidic cell-size constraints or the imaging limitations of droplet-based systems, thereby reducing sample-handling artifacts.

The ICELL8 system stood out as the only system using an ordered array. The ABRF GRG noted that this system monitors cells (with a capture capacity of up to 1,800 cells), does not have cell-size dependence, has a good cell capture efficiency, and uses 3' expression (DE) profiling. (Update: we have since developed a full-length scRNA-seq workflow!) The ICELL8 system had a total cell-capture and library-generation time that was significantly lower than other platforms: 7 hr on ICELL8 system versus 12 hr on Fluidigm C1 HT and 10 hr each on Fluidigm 96 IFC, 10X Chromium, and Illumina/Bio-Rad ddSEQ. Moreover, the ICELL8 system excelled in important data-quality metrics: sensitivity, read efficiency, and gene diversity.

When it comes to sensitivity, or the ability to detect distinct genes, the ICELL8 system performs significantly better than the best data from 10X Chromium (Figure 1, below). Approximately twice as many genes were detected with the ICELL8 system as the 10X Genomics system. Overall, the median number of genes detected by the ICELL8 system surpassed that of 10X Genomics, under both conditions, and that of the Illumina Bio-Rad ddSEQ. 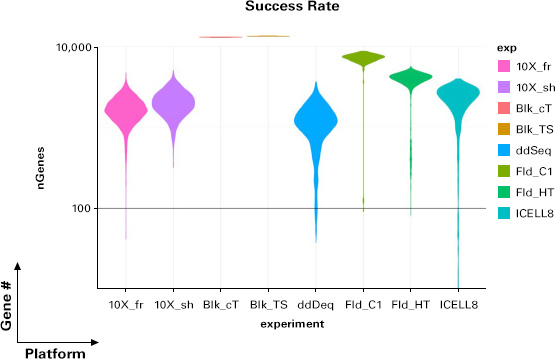 In the following analysis (Figure 2, below), the authors wanted to look at read efficiency, or the efficiency of obtaining high-quality, usable data passing a filter threshold (CPM >1). Not all reads transmit useful data; however, reads passing this threshold can be used for counting genes in qualified cells. Efficiency is higher when there is a higher proportion of usable reads out of the total number of reads sequenced. Notably, the data from 10X Genomics' and Illumina Bio-Rad's platforms showed low efficiency. For 10X Genomics' system with immediate processing, ~5.3 x 108 total reads yielded ~1.4 x 108 useful reads (~26%, and ~36% with processing after overnight shipment). Meanwhile, for the ICELL8 system, ~2.1 x 108 total reads yielded ~0.9 x 108 useful reads (~43%).

Accurately parsing out a multitude of different genes is critical to the success of single-cell studies. To assess gene diversity achieved across platform technologies (Figure 3, below), the authors downsampled to 20,000 reads per cell (from 1,000,000 per cell for Fluidigm C1 [96 IFC] and 100,000 per cell for all other platforms). While the ICELL8 system gave comparable performance, 10X Genomics fell behind, indicating that the ICELL8 system allows the determination of gene diversity with far greater complexity than 10X Genomics Chromium.

So—what's inside automated scRNA-seq platforms? Even though the systems evaluated varied in many attributes, when we drill down into factors like data quality, efficiency, and diversity, the ICELL8 system shines. To learn more about the system and its available applications, such as 3' DE and scTCR profiling, check out the ICELL8 learning center.

We would like to thank the ABRF GRG (especially Dr. Sridar V. Chittur, Director of the Microarray & HT Sequencing Core in the Center for Functional Genomics at University of Albany) for performing this illuminating study, presenting their results at the ABRF 2018 conference, and letting us share their results in this article. We are honored that they selected our ICELL8 system to be a part of their study.

We encourage anyone who uses Takara Bio instruments or products in their studies to share their results with us! We'd love to feature your work in our blog or other media.

Learn how ICELL8 technology allows flexibility, confidence, and control in your single-cell analysis.

Chips and accessories for use with the ICELL8 cx Single-Cell System.

View the growing list of cell types that have been isolated on the ICELL8 Single-Cell System.

Chips and accessories for use with the ICELL8 Single-Cell System.

Learn about the research areas being advanced with ICELL8 single-cell technology.

Find the right protocol to prepare your samples for use on the ICELL8 single-cell systems.

View our educational videos and webinars on a wide range of ICELL8 applications.

Takara Bio offers a variety of service options to help you get the best from your instrument.