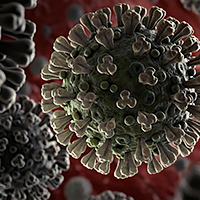 Your spit can save your life

We’ve previously blogged about the benefits of using saliva for COVID-19 testing and explained the workflow using either RNA extraction or extraction-free protocols. As time has passed, more and more focus is being placed on saliva as a sample type—particularly with the emergence of at-home collection kits and tests. However, science never stops, and researchers have continued to push the envelope for the types of information that can be gleaned from saliva samples being used to detect SARS-CoV-2.

The group responsible for the SalivaDirect method (Vogels et al. 2020) recently shared a publication on medRxiv that investigates viral load in various COVID-19 sample types and how it correlates with the severity and mortality of the disease (Silva et al. 2021). Notably, the researchers found that people with high viral loads in their saliva were more likely to have worse outcomes. In essence, your spit could potentially tell doctors if you were going to get really sick and maybe even die. Nasopharyngeal (NP) swabs, which remain one of the most common sample types utilized in COVID-19 testing, showed no such correlation, meaning it could not predict how sick you might get. Thus, monitoring viral load in saliva could be an effective way for doctors to assess which patients need more attention and/or treatments to prevent major health issues and potentially even death.

Viral load, sometimes referred to as viral burden or titer, is used to report how much virus is in a liquid sample. The sample could be environmental, like waste run-off, or medical, like any number of body fluids (blood, saliva, mucous, urine, etc.). In medicine, this value is often reported as the number of viral particles. This value tells doctors how much virus a patient has at a given time and is important because it can a) identify the presence of an active viral infection and b) tell doctors how the virus is progressing or responding to treatments.

Typically, the severity of an infection, including its symptoms and mortality, are highly correlated with the viral load—the more virus you have, the sicker you are. What has made SARS-CoV-2 so confounding is that symptoms and viral load don’t always agree. Some people can have a sizeable viral load with little to no symptoms, while others can seemingly have a manageable viral load but suddenly take a turn for the worse, get incredibly sick, and even die. So far, the lack of a better way to measure a parameter that could tell us how sick a person would get has prevented doctors from starting treatment much sooner and monitoring patients more closely to intervene and improve their outcomes (Figure 1).

The findings in Silva et al. offer a tantalizing new way for doctors to tell how sick a patient might get. In the study, the researchers measured the viral load in both saliva and NP samples using RT-qPCR in over 150 patients. They also measured plasma cytokines, chemokines, and antibodies to study the immune response over time. These measurements were matched to clinical outcomes, thus enabling researchers to directly match viral load from both sample types with outcomes like immune response and level of sickness and death.

Three main outcomes were assessed: 1. hospitalized or non-hospitalized, 2. moderate or severe symptoms, and 3. alive or deceased. Strikingly, the authors found that viral load was increased in saliva (but not NP swabs) for all those hospitalized with severe symptoms or deceased. When studying the patients’ immune system, the authors also found that negative inflammatory markers were also increased in the patients who had a high viral load in their saliva, but no such trends were observed in NP swabs.

Finally, the authors also looked at changes to viral load over time. The findings again correlated with intriguing outcomes. Those who had a high initial viral load early on in saliva that decreased early on, either naturally or via treatments, exhibited higher levels of circulating antibodies to SARS-CoV-2 and were significantly less likely to die. The NP viral load was not predictive and did not exhibit a similar pattern.

Implications and what’s next

These data offer a possible way to treat people more effectively and even save lives. By assessing viral load early on, specifically in saliva, in people who are SARS-CoV-2 positive, and then over time, doctors can have a strong predictor for disease severity and death. They can intervene earlier and with more potent treatments to ensure the infection doesn’t progress too quickly, risking overall health and life.

As we talked about in an earlier blog, routine saliva testing and surveillance is likely going to be a key method in monitoring and now potentially treating SARS-CoV-2. Any solution that can make saliva testing faster, easier, or less costly can significantly impact the pandemic. Furthermore, additional research and characterization into the information gathered from saliva can continue to be translated to the clinic, improving the outcomes for patients and the entire world.

At Takara Bio we are proud to be helping researchers by making saliva testing simple and affordable. Our new extractionless RT-qPCR kit for SARS-CoV-2 utilizes a simple workflow and can be completed in <1 hour, enabling a rapid, scalable solution for SARS-CoV-2 detection. This kit can serve as an excellent way to quickly detect and quantify SARS-CoV-2 viral load in saliva samples and significantly improve how scientists contribute to overcoming the pandemic.

This blog highlights one of the first studies identifying and characterizing the novel coronavirus, ultimately contributing to the viral genome sequence being shared worldwide.

Screening for the novel coronavirus with one-step RT-qPCR

Learn how Takara employees in Dalian, China, are working tirelessly to keep up with the demand for the one-step PrimeScript RT-PCR kit, a crucial component in the detection of the novel coronavirus.

Hear how a Product Manager in Europe is adjusting to the changing research market in light of COVID-19.

Hear how a Takara Bio employee of 27 years is contributing to the COVID-19 effort.

Find out which types of SARS-CoV-2 vaccines are out there and how Takara Bio is joining the fight.

Learn about a high-throughput qPCR system that can be used to study and detect viruses, including SARS-CoV-2.