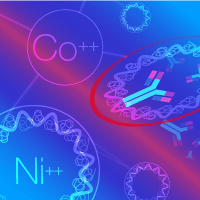 It took weeks to clone your his-tagged fusion protein and several more weeks to optimize the expression of your construct. After performing a trial purification and running the collected fractions on a gel, you find that the his-tagged protein flowed right through the resin. Where did things go wrong? Is there any way to salvage the purification? In this post, we discuss the most likely reasons a protein fusion didn't bind and options to overcome these complications

One of the most likely reasons that a his-tagged fusion protein does not bind to your selected immobilized metal affinity chromatography (IMAC) resin is that the tag itself is not accessible to coordinate with the metal, typically nickel or cobalt. Inaccessibility of the tag is usually the result of the tag being buried inside the protein's three-dimensional conformation upon folding. The easiest way to determine if a hidden his tag is responsible for the lack of binding is to perform the purification in the presence of urea or guanidinium chloride. Both urea and guanidinium chloride are powerful denaturants capable of disrupting the noncovalent and hydrogen bonds, respectively, that contribute to the tertiary and quaternary structures of proteins. If the his-tagged fusion protein is found to bind in the presence of such denaturing agents, that indicates that protein folding is to blame.

Having a hidden his tag may seem like a major roadblock, but don't panic! There are several options to explore before going back to the drawing board. One possibility is to purify the protein under denaturing conditions and then renature the protein following elution (De Bernardez Clark 1998). Another option is to add a small linker sequence—usually a flexible linker consisting of glycines and serines—that can provide some separation of the tag from the fusion protein, potentially limiting the burying of the tag (Chen, Zaro, and Shen 2013). One final option is to place the his tag at the opposite terminus of the construct to see if this location allows the tag to be more accessible.

Another factor that can influence his-tag binding to an IMAC resin is the buffer used when loading the protein sample onto the resin. While buffer compositions can be quite complex in some cases, the two components with the biggest influence on tag binding are imidazole concentration and pH.

While some protocols recommend including a small amount of imidazole in the binding buffer, adding too much can inhibit binding since the imidazole might outcompete the his tag for binding to the metal. The optimal imidazole concentrations used for binding, wash, and elution buffers are very protein dependent, and while 20 mM of imidazole might not inhibit his-tag binding of one construct, it may impact a different construct. Thus, several imidazole concentrations should be tested. In some cases, you may find that imidazole wasn't needed in the binding buffer at all!

Buffer pH can also impact histidine binding to IMAC resin, and in fact, buffers with low pH values are often used as means of elution in place of imidazole. At lower pH values, protonation of the histidine side chain impairs the ability of histidine to coordinate with the metal (Bornhorst and Falke 2000). So, ensure the pH of the buffer is at the expected value. It is important to note that imidazole can lower the pH of a buffer, so it is recommended to adjust the pH of the binding buffer after the addition of imidazole or to use an imidazole stock solution with a pH that has been preadjusted.

His tags are a powerful tool for recombinant protein purification. The small size makes it unlikely to interfere with a protein's activity, and thus it may not need to be removed to perform downstream applications with the purified protein. Although his-tagged purifications may require some initial troubleshooting, once the optimal conditions have been found, the purifications are rather easy to repeat.

A revolutionary solution for protein purification

Learn about a novel solution for recombinant protein purification from mammalian and bacterial cell lysates.

There is a constant need for faster, more efficient antibody and protein purification processes at any scale. Capturem membrane technology allows for purification directly from complex matrices, such as cell supernatants, in minutes. This technology also provides highly purified and concentrated antibodies and his-tagged proteins, even from samples containing additives not compatible with other purification technologies.