Bacterial, fungal, and viral pathogens can infect and destroy major grain crops such as corn, wheat, rice, potatoes, and soybeans, posing serious threats to the global food supply (Savary et al. 2019). The ability to detect and monitor crop pathogens is critical to preventing and controlling outbreaks. Advanced PCR genotyping and real-time quantitative PCR (RT-qPCR)-based detection methods are widely used to combat these threats due to their accuracy, sensitivity, and scalability.

Corn crops are vulnerable to Stewart's Wilt, a serious bacterial disease caused by the Pantoea stewartia bacteria that can sharply reduce crop yields and result in the death of severely affected corn plants. Accurate and rapid identification of this pathogen in infected corn plants is necessary to clearly distinguish it from other, closely-related bacteria and limit its spread, but traditional identification techniques are insufficiently sensitive and overly time consuming.

A team of researchers (Xu et al. 2010) used PCR genotyping technology to develop a detection assay for Pantoea stewartia that overcomes the limitations of traditional methods. A major obstacle they faced was finding a PCR enzyme that was sufficiently robust and reliable to amplify all of the genes in the assay across all of the different bacterial strains analyzed, including various subspecies of Pantoea stewartii. After testing a series of enzymes, this team discovered that only Titanium Taq DNA Polymerase was able to generate reproducible PCR banding patterns to distinguish this pathogen from several related strains—providing a rapid, reliable genotyping method to help protect corn crops from a devastating blight, as seen in the video below.

A large majority of the crops grown as part of the food supply in North America (NA) are susceptible to various fungal diseases that can devastate production by lowering yield and grain quality. Fusarium head blight (FHB) is one such fungal disease that can infect a wide variety of crops, including wheat, barley, corn, and oats. Although it was first identified in the late nineteenth century, FHB started appearing in NA during the mid-twentieth century and has continued to slowly expand. It is typically spread via wind and planting of infected seeds following periods of heavy rainfall in affected areas. Thus, it is critical to accurately identify and monitor FHB in a large number of samples to determine where it is currently present and prevent rapid expansion into other regions.

FHB is caused by four species of fungus: Fusarium graminearum, Fusarium culmorum, Fusarium avenaceum, and Fusarium crookwellense. In some cases, infection may be detected visually. However, visual inspection can be an inefficient and time-consuming method for monitoring FHB. Furthermore, this disease may not be visible until late in the infection cycle, when it is no longer possible to prevent it from spreading to other nearby crops. High-throughput RT-qPCR is an amenable solution, since it allows rapid and sensitive detection of FHB in a large number of crop samples at an earlier stage of infection. FHB has been studied extensively with our automated, high-throughput SmartChip Real-Time PCR System. The SmartChip system has been used to perform detection assays for a wide range of fungal species in multiple samples, increasing throughput and speeding up analysis for FHB research groups. 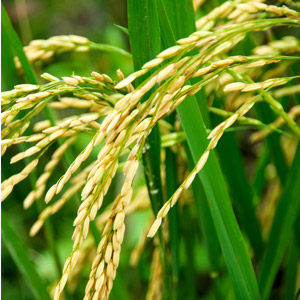 Rice crops in China and Southeast Asia are vulnerable to widespread damage from rice black-streaked dwarf disease (RBSDD), which is caused by either rice black streaked dwarf virus (RBSDV) or southern rice black streaked dwarf virus (SRBSDV). This disease results in stunted growth, darkened leaves, and leaf malformations which sharply reduce crop yields and quality. RBSDD or SRBSDV infection can be latent and difficult to diagnose at an early stage, but quite destructive at later stages. These two viruses, which are different species of the genus Fijivirus, family Reoviridae, share a similar genome structure, but are transmitted by different insect vectors and can occur in different geographical regions. Thus, in order to predict and control outbreaks, it is important not only to accurately detect this disease in infected plants and insect vectors at an early stage, but also to distinguish between the two related viruses.

A research group (Zhang et al. 2013) investigating RBSDV and SRBSDV used RT-qPCR technology to detect and differentiate between them. They developed a duplex RT-qPCR assay utilizing the One Step PrimeScript RT-PCR Kit and used it to analyze infected rice leaf samples from different provinces in China for the presence of one or both viruses. This assay was able to quantitatively detect and distinguish RBSDV and SRBSDV in a single tube by using two different fluorescent probes. Analysis of samples from various regions showed that the distribution of RBSDV- and SRBSDV-induced diseases varied according to region, consistent with the distribution of their respective insect vectors. This assay was shown to be highly sensitive, specific, and quantitative, providing a powerful tool for combating a major rice pathogen.