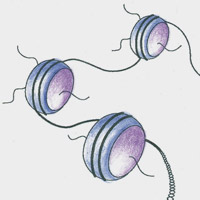 Overcoming the limits of ChIP-seq

DNA-binding proteins are responsible for many critical cellular processes, and as such, are a major source of interest to researchers seeking to understand the underlying mechanisms. Analyzing these interactions and specifically identifying the genomic loci of protein binding sites has commonly been done via ChIP-seq, a method that combines chromatin immunoprecipitation (ChIP) with the high-throughput capabilities of next-generation sequencing (NGS). ChIP-seq, however, is not without its limitations—both in terms of restrictions on sample amount and different types of analysis targets.

CUT&RUN-sequencing (Cleavage Under Targets and Release Using Nuclease) is one method that improves on this process, allowing researchers to identify a greater number of relevant genomic sequences, and to do so with greater ease. We discussed the technique—including its benefits and challenges—with Karl Glastad, a postdoctoral fellow in the lab of Shelley Berger at the University of Pennsylvania where he studies the epigenetics of ant castes.

What is the current focus of your research?

We study the molecular determinants of caste in ants. More specifically, we are interested in several questions related to how very highly related individuals can develop extremely disparate phenotypes almost entirely through differential environmental stimuli. One of the major foci of our research is related to the extreme lifespan differences between castes within an ant colony, where one individual will live <1 year, while her sister will live >10–20 years. Importantly, much of this disparity is accomplished through differential chromatin modification and transcription factor (TF) binding.

How does the CUT&RUN technique fit into your experimental goals? What does it enable that traditional techniques do not?

Because individual ant tissues are often quite limiting in terms of biological material (15–150k cells), traditional methods such as cross-linking ChIP-seq (X-ChIP) are often prohibitive in their requirements. While Native ChIP has been quite fruitful for assaying histone modifications in these samples, it is unable to profile non-histone chromatin-binding proteins such as transcription factors. CUT&RUN has allowed us to profile several TFs that would be otherwise inaccessible to us using X-ChIP. Furthermore, we have found that several antibodies raised against conserved regions of mammalian proteins which do not work with X-ChIP in ants actually appear to work using CUT&RUN. Thus, not only does CUT&RUN allow us to examine several TFs in the same ant brain, but it has also allowed us to expand our repertoire of target molecules using antibodies raised against mammalian antigens/proteins.

Can you briefly describe how CUT&RUN is performed and how it works at a molecular level?

Unlike conventional ChIP where the genome is fragmented (either through sonication or nuclease activity) and the resulting loci bound to target proteins are precipitated, CUT&RUN involves the binding of an antibody in situ within intact cells or nuclei, followed by cleavage of the DNA directly bound by the target protein. This is accomplished by a protein A-MNase fusion protein, which facilitates the specific cleavage of only the DNA bound by the protein of interest, greatly reducing the background typical of other approaches such as immunoprecipitation. Furthermore, because CUT&RUN is done on intact cells or nuclei—similarly to immunofluorescence (IF)—it sometimes allows the effective use of antibodies that would not work in conventional ChIP.

For which applications is CUT&RUN best suited? Are there applications where other methods like ChiP-seq might be a better choice?

CUT&RUN is suited for samples with very little material, or cases where an antibody may work via IF but not conventional immunoprecipitation. CUT&RUN also features much lower background (due to the nature of the targeted cleavage) than conventional ChIP-seq.

However, CUT&RUN is still in its infancy, and thus does not enjoy the informational or computational resources afforded ChIP-seq. For example, normalization controls (such as input material for ChIP-seq) are limited, and currently, the question of how best to compare different conditions (particularly those with incremental differences in binding) is still an open issue. We have personally seen that this can be challenging when there is less control over input cell numbers, particularly when only a subset of cells experiences a defined change in binding of a given factor. Nevertheless, it is highly likely that as this method increases in its prevalence and support, these issues will vanish.

What other experimental approaches do you use (NGS or non-NGS) to complement the data you generate with CUT&RUN?

What is the ultimate goal of your work?

To use ants to make humans immortal, of course... 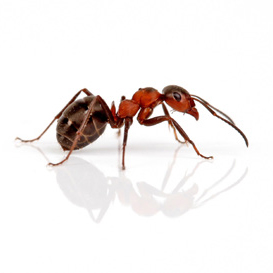 We are continually inspired to hear about the innovative techniques and the advancements that researchers are able to make with them. Karl has incorporated SMARTer ThruPLEX chemistry into his CUT&RUN technique, in order to prepare NGS libraries from the resulting samples, and we are excited to see how he is able to meet his experimental challenges.

Talk to our team and learn how you can optimize this DNA-seq technology for your lab.