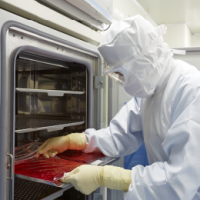 In the race to develop gene therapies to treat both common and rare genetic diseases, adeno-associated virus (AAV) vectors have very quickly become one of the top choices for in vivo gene delivery platforms (Goswami et al. 2019). AAV vectors are considered safe because of their low immunogenicity and cytotoxicity, ability to transduce nondividing cells, and very low frequency of integration into the host genome. Additionally, several recombinant and engineered AAVs have different serotypes that allow specific cell types to be targeted, including both dividing and nondividing cell types. The safety and efficacy of recombinant AAV vectors have been established in a number of Phase I, II, and III clinical trials.

To date, there are only two AAV-delivered gene therapies approved by the FDA. The first, Luxturna, was approved in 2017 for the treatment of Leber's congenital amaurosis, an inherited retinal disease. The second, Zolgensma, was approved just last year for the treatment of pediatric patients with spinal muscular atrophy. In addition to these two approved therapies, several other AAV therapies have been and are being evaluated in clinical trials worldwide.

One such therapy that has shown promise is AAV-mediated delivery of the dopa decarboxylase gene (DDC), which encodes the aromatic l-amino acid decarboxylase (AADC) enzyme. AADC deficiency is a rare neuromuscular disorder that is caused by mutations in the DDC gene that impair the enzyme's activity and lead to developmental delays and motor dysfunction. AADC deficiency manifests in early infancy, and, in severe cases, leaves patients bedridden for life. In their recent publication, Kojima et al. at Jichi Medical University described the results of a Phase I/II trial to investigate the effects of this AAV therapy on patients 4–19 years of age, with various DDC gene mutations. They administered a clinical-grade AAV vector expressing the human DDC gene via bilateral intraputaminal infusion to 6 patients, 5 of whom were bedridden. Following infusion, the authors monitored the patients' motor, cognitive, and verbal functions, as well as any adverse events caused by the AAV vector.

The authors found that motor function improved for all 6 patients, as indicated by increased Alberta Infant Motor Scale (AIMS) scores (Figure 1). Following treatment, one bedridden patient was able to walk with the assistance of a walker, and two others were able to stand with support. Other symptoms associated with AADC deficiency also showed improvement in all patients, including dystonia, hypersalivation, difficulty breathing, and emotional disturbances. No severe adverse events were observed, suggesting that this AAV-mediated gene therapy may be a safe and effective treatment for patients with AADC deficiency.

This study demonstrates the potential of AAV therapies for treating rare genetic diseases like AADC deficiency. It also demonstrates the importance of having a reliable partner who can manufacture clinical-grade AAV vectors to administer to patients for clinical studies. We are proud that Kojima et al. chose Takara Bio as their manufacturing partner for this study.