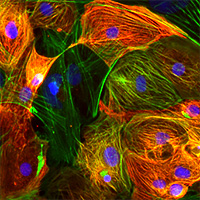 Stem cells have risen to the forefront of biological discoveries and therapies, with expanding utility enabling scientists to dive into fundamental questions about cell differentiation and growth, organ development, and disease modeling. No small feat for so young a research area! Only 20 years have passed since the derivation of the first human embryonic stem cells (hESCs), yet researchers have pushed forward in impressive fashion, moving from that first discovery to drug development and clinical trials.

The late 1990s marked the first derivation of pluripotent embryonic stem cell lines from human blastocysts (Thomson et al. 1998), opening up significant new research possibilities. These five original hESC lines were able to maintain prolonged undifferentiated proliferation in vitro as well as the potential for germline development. Nonhuman ES lines had previously been available, but now researchers could start to investigate development and function in ways specific to humans and more relevant to clinical applications.

Those first hESC lines were widely distributed, and two years of work brought forth another milestone: the advent of successful in vitro differentiation of those hESCs into the three embryonic germ layers (Itskovitz-Eldor et al. 2000). The authors were able to differentiate the ES cells into embryoid bodies that demonstrated the expected expression of markers specific to different cell types, including hematopoietic cells, myocardial cells, neuronal cells, and endodermal cells. When grown as monolayers, the cells even showed the ability to take on different morphologies and functions.

The potential seen in earlier publications led to a concerted effort to investigate the multilineage potential of hESCs. Just two years later, the field advanced specific differentiation of hESCs into a wide range of mature cell types both in vivo and in vitro. Included among them were hematopoietic precursors and pancreatic islet-like cells, in addition to cardiac and neuronal cells (Ludwig and Thomson 2004).

Previous advancements in somatic cell reprogramming used fibroblasts to produce the hiPSCs, and scientists started to look for cell types that would be easier to obtain and usher in a higher-efficiency system for study. Just one year after the first production of hiPSCs, researchers reported derivation of hiPSCs from human keratinocytes (Aasen et al. 2008; Maherali et al. 2008). This proved to be 100-fold more efficient and twofold faster than earlier methods. Better yet, these hiPSCs could be generated from just a single human hair. In 2010, researchers published the reprogramming of peripheral blood cells, providing yet another avenue for easier access to starting material, including frozen patient samples stored in blood banks (Staerk et al. 2010; Loh et al. 2010).

Moving forward: 2018 and beyond

Progress in the field continues to be impressive, with an increasing number of publications covering everything from basic questions of tissue generation and human embryology to applications that directly affect human health, like disease modeling and regenerative medicine. What started out as five hESC lines 20 years ago has blossomed into hundreds of hESC lines and thousands of hiPSC lines available for use (Ludwig et al. 2018). Since 2008, increased investment has energized basic, translational, and clinical research, with the California Institute for Regenerative Medicine approving funding for their 50th clinical trial just this month. Notably, the first clinical trials using hESC-derived cells to treat spinal cord injury launched in 2010 and laid the groundwork for related trials that have shown promising results in terms of safety and efficacy, and that are advancing to the next phase. Each step forward brings with it new questions to investigate, and new potential for improving the human condition. If the past two decades are any measure, the future of stem cell research will continue to be an exciting, fast-paced environment with vast and varied possibilities.

Overviews and discussions on a variety of stem cell research topics.