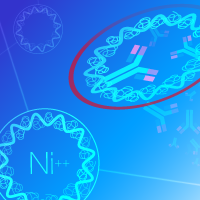 One major application for streptavidin-based pull-down experiments is the targeted enrichment of monoclonal antibodies (mAb) and proteins from complex mixtures. Here we demonstrate the use of Capturem Streptavidin to enrich an anti-rabbit IgG using a successive capture protocol that takes less than 15 minutes from start to finish. This is significantly faster than traditional methods that require incubation steps that can take up to 90 minutes.

Spin columns were first equilibrated by adding 800 µl Equilibration Buffer to the column followed by centrifugation at 500g for 1 min. Next, spin columns were loaded with 200 µl of biotinylated rabbit IgG at 0.24 mg/ml, then centrifuged at 500g for 1 min at room temperature to immobilize the biotinylated antibody. The columns were then washed with 400 µl Wash Buffer. Subsequently, 200 µl of anti-rabbit IgG at a concentration of 0.50 mg/ml was loaded onto the column and spun at 500g for 1 min. Two more wash steps were performed, first with 400 µl Wash Buffer and then with 400 µl of PBS. Finally, the captured secondary Ab was eluted using three successive elutions, each consisting of 90 µl of 1.0 M glycine. Eluted Ab was quantified using A280 measurements from a Nanodrop spectrophotometer. Bound biotinylated Ab was quantified by measuring the absorbance before and after loading.

Technical replicates of either biotinylated oligo (Biotin-G/AGCTTCATTTCCCGTAAATCCCTAAAGCT), biotinylated BSA, or biotinylated IgG were loaded into different wells of a 96-well plate for the reproducibility experiments (Figure 2) or into different spin columns for the capacity tests (Table). Absorbance measurements (A260 for the oligonucleotides, A280 for BSA and IgG) were made before and after loading to determine the amount of biomolecules bound to the membranes. For protein binding experiments 100 µg biotinylated BSA was diluted in 200 µl Binding Buffer and applied to each well while for oligonucleotide binding, 3.8 µg of oligo in 200 µl Binding Buffer were used.