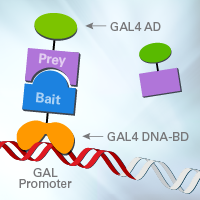 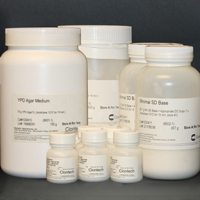 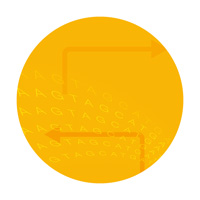 We offer an extensive variety of validated, pretransformed cDNA libraries in yeast. Our Mate & Plate libraries are cDNA libraries of GAL4-AD prey fusion proteins that are ready for immediate screening in Y2H systems. These libraries have been transformed into the MATα haploid yeast strain, Y187, which can be easily mated to a haploid MATa reporter strain (such as Y2HGold or AH109). We also offer the option to generate your own custom libraries with our Make Your Own "Mate & Plate" Library System.

Our Mate & Plate protocol makes library screening an easy task: simply combine the Mate & Plate library culture with a culture of your bait-expressing reporter strain (Figure 1). Coculturing the two strains overnight produces an array of diploid yeast clones, each coexpressing your bait with a different library prey protein. The clone pool can then be plated on selective media to screen for individual clones that express the appropriate reporter genes and markers, indicating the presence of interacting hybrid protein pairs.

We also offer a selection of normalized Mate & Plate libraries which further simplify the search for novel PPIs. Duplex-specific nuclease (DSN) normalization selectively removes abundant, and therefore redundant, cDNAs from the total pool and enriches the library for less abundant sequences (Figure 2). This process eliminates a major source of potential false positives. Library complexity effectively increases, reducing the number of independent clones that must be screened in order to detect genuine positive interactions. This lowers the frequency of false positives that emerge from primary, low-stringency screens. By using normalized Mate & Plate libraries together with the stringent screening methodology provided by the Matchmaker Gold Yeast Two-Hybrid System, your primary screens will greatly favor the identification of genuine positives, produce few false positives, and yield virtually no background colonies.

Our universal libraries provide the broadest and most complete coverage of genes expressed in almost any tissue. To create these all-purpose, normalized libraries, we combined RNAs from a diverse collection of either mouse or human whole tissues that are specifically chosen to represent an expansive range of expressed genes. These same RNA pools are used for our qPCR Human Reference cDNA and qPCR Human Reference Total RNA, as well as our Mouse Universal Reference Total RNA. Following cDNA synthesis and amplification using SMART technology, we normalize each cDNA pool before constructing and transforming the library into yeast. Combining "across-the-board" gene representation with the enrichment of low-copy-number cDNA, our universal normalized libraries offer the greatest capacity for identifying genuine binding partners of your protein of interest.

To demonstrate this, we searched for binding partners of a murine p53-bait using our Mate & Plate Library - HeLa S3 (Normalized). A medium-stringency screen of only 279,000 clones yielded 62 colonies that could possibly contain p53-binding proteins (Table I). In contrast, we recommend screening 1–2 million clones for a standard library. Of eight colonies that were selected for further analysis, four contained three different, well-known binding partners of p53: PCNA, PRMT3, and PTEN. Thus, it is possible to screen a significantly smaller number of clones in a normalized library and still generate valuable data.

Make your own Mate & Plate library

For researchers wishing to construct and transform their own cDNA library, we offer the convenient and straightforward Make Your Own "Mate & Plate" Library System. This system combines SMART technology with highly efficient homologous recombination in yeast, allowing you to efficiently synthesize cDNA and then clone it into the pGADT7-Rec AD Cloning Vector directly in yeast. Your library is constructed and transformed into the Y187 Yeast Strain in a single step. The result is a custom-made library ready to be used in our easy Mate & Plate protocol.

Mate & Plate libraries, coupled with the stringent screening of the Matchmaker Gold Yeast Two-Hybrid System, provide the most complete and advanced system for discovering new protein relationships. These tools afford you the greatest opportunities for Y2H screening success with the least amount of time and effort. Finally, to further optimize your workflow, we offer Aureobasidin A—a highly effective, selectable marker—to simply and rapidly screen colonies in Y2H screens.