A common goal in the pharmaceutical industry is to develop new drugs that are metabolized slowly in order to extend the half-life of a drug. Doing so would minimize the number of doses required, and this would have a profound effect on the quality of life for patients suffering from chronic illnesses (la Hultman et al. 2016). However, these types of drugs, known as low-clearance compounds, are failing in the clinic due to difficulties in accurately determining how quickly they are cleared from the body. Often, the clearance of a low-clearance compound is overestimated, resulting in significant underestimation of the clinical half-life, which may not be compatible with the intended use of the drug. Therefore, the ability to accurately measure the clearance of a drug is essential for drug development and safe, accurate dosing.

Pharmacokinetics is the study of how a drug moves through the body and is important for understanding how quickly a drug is cleared from the body. It consists of four processes: absorption, distribution, metabolism, and excretion. Drug metabolism occurs primarily in the liver and is the main mechanism by which drugs are eliminated from the body. The loss of a drug as it passes through the liver is known as hepatic clearance—the key factor in determining how long a drug stays in the body, and consequently, the duration of its effects (Zhang et al. 2012).

Hepatic clearance is influenced by two factors: the rate of hepatic blood flow (which reflects the delivery of a drug to the liver) and how efficiently a drug is removed from the blood. The hepatic extraction ratio is an indication of the efficiency of drug removal from the blood (Clarks 2013). The extraction ratio is dependent on 1) the fraction of the drug that is freely available for interaction with hepatic enzymes and 2) the ability of hepatic enzymes to metabolize the freely available drug, a property known as intrinsic clearance (CLint). Drugs that have a high extraction ratio are known as high-clearance drugs and are rapidly eliminated from the body. In contrast, drugs with a low extraction ratio are known as low-clearance drugs and are slowly eliminated from the body due to the liver's low intrinsic ability to metabolize and excrete these drugs.

Several novel approaches have been developed for determining the CLint value for low-clearance drugs. For example, with the relay method, suspension hepatocytes are incubated with the drug for four hours, and then the drug supernatant is transferred to freshly thawed suspension hepatocytes. This is repeated five times and allows the drug to be exposed to hepatic enzymes for 20 hours. Additionally, cell lines and culture systems that are able to maintain hepatic enzyme activity for long periods of time have been developed and evaluated for low-clearance studies. These include monolayer cultures of plated cryopreserved primary hepatocytes or HepaRG cells, coculture hepatocyte systems such as HepatoPac or HuREL, and primary hepatocytes cultured in 3D spheroids (Di and Obach 2015). However, these approaches can be complicated, time consuming, and expensive, or can have poor predictability of in vivo clearance. Therefore, there is still a need for a user-friendly, reliable model system for the prediction of intrinsic clearance for low-clearance drugs. 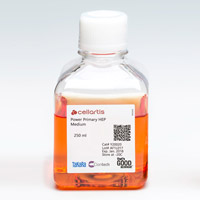 We developed Cellartis Power Primary HEP Medium, a complete medium that maintains healthy, functional human primary hepatocytes for up to four weeks in conventional 2D cultures—without the need for overlays or sandwich cultures. Cells have normal morphology and stable albumin secretion, as well as stable CYP activities and inducible CYP expression. More importantly, human primary hepatocytes can be cultured in Cellartis Power Primary HEP Medium for up to 10 days without medium changes. This makes it possible to more accurately study and measure intrinsic clearance of low-clearance compounds without sequential medium changes or complicated cell culture systems. More accurate in vitro systems allow more accurate in vivo predictions, which are critical for determining drug safety and efficacy in patients and advancing low-clearance compounds in the clinic.

In collaboration with AstraZeneca, we conducted an experiment to evaluate whether primary hepatocytes cultured in Cellartis Power Primary HEP Medium can be used as a cell model to predict intrinsic clearance. For this first experiment, we used the drug quinidine, a compound with known low-intrinsic clearance. The drug is mainly metabolized by CYP3A4. In this study, the quinidine concentration was analyzed at times zero; 1, 3, and 5 hours; and 1, 2, 3, 5, 7, 9, and 10 days of incubation. The predicted in vivo CLint value based on the calculated in vitro CLint value was in very good agreement (within a twofold difference) with the observed in vivo CLint value.