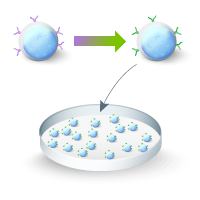 Blog post: CRISPR takes a giant step towards the clinic

CRISPR/Cas9-based gene editing is an effective technique for obtaining knockout mutations with high efficiency, but applying this technology to engineer site-specific insertion of genes or sequences longer than 200 bp via homology-directed repair (HDR) is often very difficult.

A primary challenge in performing CRISPR-based knockins involves achieving efficient delivery of the DNA template which is used for HDR following Cas9-sgRNA-mediated cleavage at the genomic target site. Electroporation of ribonucleoprotein complexes (RNPs) is the preferred method for delivery of Cas9 and sgRNA in vitro due to the easy preparation of the reagents and the transience of their presence in target cells, which limits the possibility of off-target effects. Two popular approaches that leverage this method to engineer knockins involve co-electroporation of the DNA donor template along with the Cas9-sgRNA RNPs, or adeno-associated virus (AAV)-mediated transduction of the donor as ssDNA following RNP electroporation. While the use of AAV often results in high editing efficiencies and on-target specificity, it requires cloning into the appropriate vectors and producing viral particles prior to genome editing.

For approaches involving co-electroporation of the HDR template together with the Cas9-sgRNA RNP, the donor can consist of either double-stranded DNA (dsDNA, linear or plasmid) or single-stranded DNA (ssDNA). However, the application of ssDNA is associated with two important advantages: lower rates of random or off-target integration (Chen et al. 2011, Figure 3; Roth et al. 2018, Extended Figure 4) and lower toxicity (Roth et al. 2018, Extended Figure 1), especially when working with hiPSCs or primary cells.

The Guide-it Long ssDNA Production System v2 provides a simple and fast method for producing long ssDNA (up to 5,000 nt) for use as a donor template in gene editing applications. Below, we discuss the production workflow and show data demonstrating the use of ssDNA to engineer precise, site-specific insertions via HDR.

The Guide-it Long ssDNA Production System v2 employs a simple and efficient in vitro protocol for the on-demand generation of long ssDNA strands. The method involves PCR amplification of the donor template using primer pairs that include one phosphorylated oligo. Depending on whether the forward or reverse primer is phosphorylated, the resulting dsDNA PCR product is phosphorylated on either the sense or antisense strand, respectively. In the next step, the phosphorylated strand of the dsDNA is selectively digested by the nucleases Strandase A and B, generating ssDNA. This workflow is summarized by the following schematic:

Taking the CCR5 gene as a template for amplifying PCR products of varying lengths, we demonstrated that the kit enables the generation of ssDNA ranging from 500–5,000 nt (Figure 2, Panel B). Production of ssDNA can be confirmed on an agarose gel, with the ssDNA typically running at a lower molecular weight and yielding a band with lower intensity than the corresponding dsDNA PCR substrate.

Advantages of ssDNA vs. dsDNA

To compare rates of random integration for various types of donor DNA, three different types of templates (plasmid, dsDNA, and ssDNA) designed to fuse AcGFP1 to GADPH were transfected into HEK293 cells alone or in tandem with plasmids encoding Cas9 and an sgRNA targeting GADPH (Figure 3, Panel A). Three days posttransfection, frequencies of GFP-positive cells in the resulting cell populations were determined by flow cytometry (Figure 3, Panel B). The FACS results demonstrated that dsDNA yielded the highest frequency of GFP-positive cells when combined with Cas9 and sgRNA, but that a significant proportion of GFP-positive cells were also produced in the absence of Cas9/sgRNA complexes, suggesting that dsDNA donors can integrate with high efficiency at sites other than a given target site. In contrast, such random, Cas9-independent integration was not observed for ssDNA templates, which efficiently yielded GFP-positive cells only when paired with Cas9 and sgRNA.

In a separate experiment, an HDR template was designed for the insertion of an expression cassette encoding AcGFP1 under the constitutive EF1α promoter at the AAVS1 safe harbor site (Figure 5, Panel A) in hiPSCs. The ssDNA produced from the template included 600-nt homology arms with a total length of 3,400 nt, and it was coelectroporated into hiPSCs along with RNPs targeting the AAVS1 locus. Following gene editing, FACS analysis of the resulting cell population showed that 3.64% of the cells were positive for AcGFP1 expression (Figure 6, Panel B), demonstrating efficient knockin of the sizable EF1α-AcGFP1 expression cassette.

CAR‐T cells (chimeric antigen receptor-engineered T cells) and TCR‐T cells (T cell receptor-engineered T cells) have emerged as promising therapeutics for hematological and solid malignancies. The application of CRISPR/Cas9 in this field holds great potential, as it enables the insertion of CAR and TCR constructs into specific genomic target sites, and knockout or replacement of endogenous factors (Eyquem et al. 2017).

To demonstrate the applicability of ssDNA for immune cell therapy research, a 2.8-kb HDR template was designed for knockin of murine T-cell receptor α- and β-chains at the TRAC locus in primary human CD3+ T cells using ssDNA as a donor (Schober et al. 2019). Specifically, RNPs with sgRNAs targeting TRAC and TRBC loci, respectively, were electroporated together with the ssDNA HDR template encoding the murine T-cell receptor α- and β-chains. Knockout of both endogenous TCR genes (TRAC and TRBC) was required in order to facilitate sufficient surface expression and ensure correct pairing of the transgenic mouse receptor chains. Ten days after electroporation, flow cytometry was used to detect the successful HDR and expression of the murine TCRs (Figure 6, Panel B).

As demonstrated above, the use of ssDNA donor templates for CRISPR-based knockin applications enables more reliable editing with less nonspecific integration and lower cytotoxicity compared to dsDNA templates. However, widespread use of ssDNA has been limited for applications requiring donor templates >200 nt due to the cost and difficulty associated with producing longer ssDNA molecules. The Guide-it Long ssDNA Production System v2 addresses this limitation by enabling the on-demand production of ssDNA ranging from 500–5,000 nt in an error-free and cost-effective manner.

As shown, ssDNA produced with the Guide-it kit was associated with significantly less nonspecific integration and toxicity in comparison to dsDNA when introduced along with Cas9 RNPs into target cells and enabled efficient knockin of multi-kb constructs.

hiPSCs used in these studies were from Cellartis Human iPS Cell Line 18 (ChiPSC18), and were cultured using Cellartis DEF-CS 500 Basal Medium with Additives.

The different cell types were electroporated using a Neon electroporation system according to the following guidelines:

hiPSCs: 1.5 x 105 cells were electroporated in Buffer R with 1 µg of ssDNA or dsDNA in either the presence or absence of 2.25 µg of Cas9 nuclease combined with 0.45 µg of sgRNA. The electroporation conditions were as follows: pulse voltage / pulse width / pulse number = 1100 V / 20 ms / 2 pulses

Cytotoxicity of hiPSCs was assessed 48 hr after electroporation by microscopy.

For the experiments involving HEK293 cells, we used the Guide-it CRISPR/Cas9 System, consisting of a plasmid expressing Cas9 and the sgRNA. The Cas9-sgRNA plasmid was transfected along with the donor templates using Xfect Transfection Reagent. Again, long ssDNA was produced according to the user manual for the Guide-it Long ssDNA Production System v2, and 1 µg of ssDNA or dsDNA was cotransfected along with the Cas9-sgRNA expression plasmid. The transfected cells were subjected to flow cytometry analysis three days posttransfection.

Maximize your likelihood for success by reading these FAQs compiled by our R&D team.

Follow these protocols developed by our R&D team for easy CRISPR/Cas-based gene editing of immune cells.

CRISPR takes a giant step towards the clinic

Learn about the development of a powerful new method for reprogramming T cells.

Before delivering sgRNA to your cells, use a novel in vitro assay to get accurate predictions of sgRNA cleavage efficiency.

Tag an endogenous gene with AcGFP1 in iPS cells

Tag an endogenous gene with a myc tag in iPS cells

Workflow for tagging endogenous genes with an epitope tag.