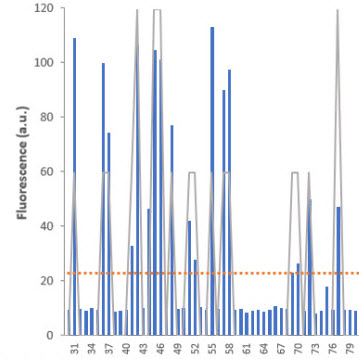 The principle of the assay is described in the following video:

What is the kit workflow?

The assay employed by the Guide-it SNP Screening Kit consists of the following steps:

As indicated, this workflow enables analysis of 96 samples in less than 4 hours.

What oligos do I need to order to perform the assay?

Assaying a given nucleotide substitution with the Guide-it SNP Screening Kit requires the following oligos:

Oligos used with the Guide-it SNP Screening Kit do not require special modifications such as fluorescent labels or quenchers, but the kit protocol does require the inclusion of a hexanediol (/3C6/) blocking modification on the 3' end of the flap-probe oligo. Inclusion of this modification is a standard option provided with oligo synthesis services, and no special purification step is needed in this case, only standard desalting. To simplify the oligo design process, we have developed an online software tool that outputs assay-specific oligo sequences in a ready-to-order format. Additional information regarding the design of the assay-specific oligos is provided in the Guide-it SNP Screening Kit User Manual.

How does Guide-it Flapase detect the edited nucleotide?

Guide-it Flapase is a recombinant, structure-specific nuclease from Takara Bio; it recognizes and cleaves double-flap structures, but is unable to cleave gapped structures. The Guide-it SNP Screening Kit employs this feature to assay for single-nucleotide substitutions: the main difference between the double-flap and the gapped structures is whether or not hybridization occurs between the flap-probe oligo and the PCR product at the position of the interrogated base.

What is included in the kit?

The Guide-it SNP Screening Kit includes all necessary reagents for extraction and amplification of genomic DNA from mammalian cell samples, and for performing the Guide-it Flapase enzymatic assay:

In addition to user-provided oligos specific for each assay, performing the assay requires a thermal cycler and fluorescence plate reader.

What do I need for the detection of the assay signal?

Detection of the assay signal requires only a standard fluorescence plate reader that enables excitation at 485 nm and capture at 535 nm. If the plate reader to be used has different possible filter sets, the Guide-it SNP Control Set provided in the kit can be used to determine the optimal combination of filters.

Can a qPCR thermal cycler be used for fluorescence detection?

Yes, a qPCR thermal cycler can be used. The Guide-it SNP Screening Kit employs an end-point assay that doesn't require real-time monitoring of the flapase reaction, but a qPCR machine can be used during the enzymatic assay to periodically measure fluorescence (e.g., every 3 minutes) to follow the kinetics of the reaction and upon completion of the reaction.

Does the Guide-it SNP Screening Kit allow for detection of any nucleotide substitution regardless of the genomic target site?

Yes. The Guide-it SNP Screening Kit has been used successfully to analyze SNPs at 18 different loci within the human genome (corresponding to 14 different genes, see table); a subset of the results are shown in the graph below.

All the genomic loci and the nucleotide substitutions we have tested so far are listed in the table below:

Can I use the kit if I have no idea what the substitution is?

Can the Guide-it SNP Screening Kit be used for genotyping?

Yes, you will need to design one specific flap-probe per possible nucleotide at the target site and perform independent assays.

Can the kit be used to detect successful homologous recombination (HR) in edited populations?

Although the Guide-it SNP Screening Kit was specifically intended for detection of SNPs in clonal cell lines, it can be used to detect successful HR in an edited population with a detection limit around 5%*. Download our poster to see data relating to this application. Visit our technical support page if you need more information about how to use the kit for the detection of HR.

*For this particular application, we recommend that genomic DNA should be extracted from the edited population using NucleoSpin Tissue Columns (Cat. #740952.250S).

Do I need to use column-purified genomic DNA?

No. The cells are lysed with MightyPrep Reagent for DNA, and the supernatant from the lysate is used directly as template for the PCR to amplify the genomic target sequence without the need for extra purification steps.

Which cell types have been analyzed using the kit? Can the kit be used for suspension cells?

The Guide-it SNP Screening Kit has been used successfully to analyze a variety of cell types, including cells grown in suspension (Jurkat cells) and adherent cells (fibroblasts, hiPSCs).

What cell densities are suitable for analysis with the kit?

Clonal cell lines in a 96-well plate can have different growth rates, and therefore the protocol has been optimized for a wide range of cell densities (from 2 x 104 to 2 x 105 cells per well).

However, if this assay is being performed for the detection of homologous recombination we recommend that the assay be performed with genomic DNA that has been purified using NucleoSpin Tissue Columns (Cat. # 740952.250S).

Can the protocol for the Guide-it SNP Screening Kit be adapted for use with 384-well plates?

We have not tested the kit protocol using 384-well plates; however, theorizing such an adaptation, the only modification we can foresee at this time is a reduction in reaction volumes. Please note that some troubleshooting may be required to ensure successful setup of the PCR reaction and enzymatic assay and to confirm that the resulting fluorescent signal is strong enough to be detected using your chosen method. If you need more assistance with this, please contact our Technical Support team.

Can the kit assay be used to distinguish homozygotes from heterozygotes?

As demonstrated by the data shown below, each assay performed with the kit provides a qualitative output rather than a quantitative measure of a substitution's frequency. Therefore, a single Guide-it SNP screening assay using the current single-color chemistry cannot be used to distinguish homozygous clones from heterozygous clones (see FAQ above, "Could the Guide-it SNP Screening Kit be used for genotyping?" for information about how the kit can be used to assess zygosity). We are developing a new version of the kit that will enable simultaneous detection of either of two bases at the same position (e.g., SNP and wild type) using two Guide-it flap detectors in tandem (one triggering a red fluorescent signal and the other one producing a green signal).

How clean does the PCR of the genomic target sequence need to be?

The assay performs well regardless of whether extra PCR products are generated during amplification of the genomic target sequence. See the image below for example PCR amplification results that have been successfully used to detect nucleotide substitutions with this kit.

How sensitive is the Guide-it SNP Screening Kit to the presence of mutations close to the site of the nucleotide substitution being assayed?

The Guide-it SNP Screening Kit is highly sensitive to the presence of mutations in the genomic target sequence surrounding the site of the substitution being assayed. The displacement oligo and the flap-probe oligo anneal to the region immediately adjacent to the SNP, and the presence of unknown mutations in that region would affect the annealing of the oligos with the PCR product and the formation of the double-flap structure.

Are there any limitations or special considerations regarding what target sequences can be analyzed with the kit?

The only design limitation one must consider when designing the probes is that the displacement oligo must not encode the sequences 5'-GGAGn-3' or 5'-GGAGNn-3' at its 3' terminus (where N can be any base, and n is the extra noncomplementary base that depends on the substitution being assayed). Displacement oligos containing these sequences will generate a background signal in the enzymatic assay. In these scenarios it is advisable to redesign the assay to target the opposite strand of the PCR product, such that the displacement oligo doesn't encode the restricted sequence at its 3' terminus (see example in figure below).

Can the kit only be used to detect single-nucleotide substitutions? Would it be suitable for detecting longer insertions?

The current version of the Guide-it SNP Screening Kit can only be used to detect single-nucleotide substitutions, not longer insertions.

We are, however, in the process of developing a new version of the kit that will enable detection of longer insertions using two Guide-it Flap Detectors in tandem. One detector yields a red fluorescent signal while the other one generates a green signal, allowing simultaneous detection of seamless insertions at both the 5' and 3' ends of the recombinant sequence. We have applied this updated approach for detecting the fusion of a myc tag to an endogenous gene in hiPSCs (a poster including this data is available for download).