Choose from the following categories to learn more about Tet-On 3G systems:

Why use Tet-On 3G systems?

When the Tet-On system was originally launched by Clontech Laboratories (now Takara Bio USA, Inc.) in 1996, it was the premier inducible expression system. However, its performance has been surpassed by two subsequent generations of the Tet-On system. Compared to their predecessors, Tet-On 3G systems demonstrate lower basal expression and higher sensitivity to the doxycycline (Dox) inducer.

The tetracycline responsive element (TRE) consists of seven repeats of a 19-bp tet operator sequence located upstream of a minimal CMV promoter. It provides very low basal expression and high maximal expression after induction. Although the tet operator repeats are identical in all Tet-On generations, the junction sequences in the Tet-On 3G version (PTRE3G) have been altered to an even spacing and the central portions have been randomized. These changes minimize background expression, which results in an improved dynamic expression range compared to previous TRE promoters.

Tet-On 3G is a modified, improved Tet-On Advanced transcriptional activator protein (transactivator) which has been evolved to display far higher sensitivity to doxycycline. Tet-On 3G generates very high maximal expression and responds to lower Dox concentrations than its predecessors. These Dox concentrations are far below cytotoxic levels for either cell culture or transgenic studies. The increased Dox sensitivity is particularly advantageous for in vivo studies in tissues where high Dox concentrations are difficult to attain (e.g., brain).

When Dox binds to the Tet-On 3G transactivator, the transactivator undergoes a conformational change that allows it to bind to PTRE3G and initiate transcription.

What is the Tet-On 3G transactivator?

Some types of cells (particularly hematopoietic cells and stem cells) tend to silence CMV promoters over time. EF-1 alpha promoter versions of the Tet-On 3G systems provide consistent long-term expression of the Tet-On 3G transactivator in these cells, as well as a broad range of other cell types. 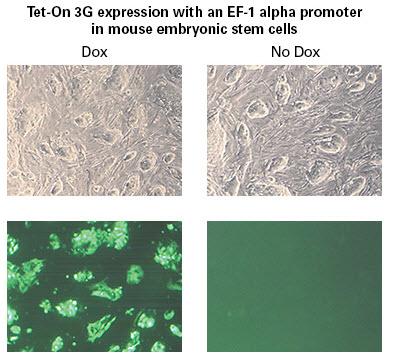 The Tet-On 3G Inducible Expression System (EF1alpha Version) provides inducible expression in hematopoietic cells. Jurkat cells were transfected with pEF1a-Tet3G using Xfect Transfection Reagent, and stable clones were selected by limiting dilution. 83% of the Jurkat Tet-On 3G clones that we tested showed strong inducible expression. Such levels of control were not possible with previous versions of Tet-On systems for this cell line.

We offer two types of Tet-inducible gene coexpression. Both types give you a choice of expressing a target gene and a reporter gene, or two target genes. 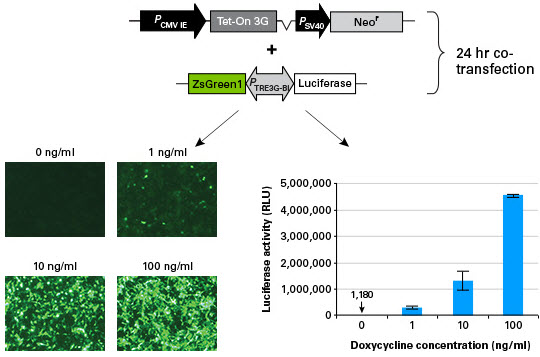 Doxycycline-regulated expression of two genes. ZsGreen1 and firefly luciferase were cloned into separate multiple cloning sites that flank the inducible bidirectional promoter in the pTRE3G-BI vector. The plasmid was then cotransfected into HEK 293 cells with pCMV-Tet3G (which expresses the Tet-On 3G transactivator). Cells were treated with the indicated doses of doxycycline, and induced gene expression was measured 24 hr later (RLU = Relative Light Units).

Bicistronic (IRES-containing) vectors allow you to express two proteins simultaneously but separately, from the same RNA transcript. Bicistronic vectors are ideal for stable clone selection, because you can monitor expression of your transgene together with a bright fluorescent protein (mCherry or ZsGreen1). Please note that expression of the proteins that are upstream and downstream of the IRES sequence varies. Read more about bicistronic Tet-On 3G systems » 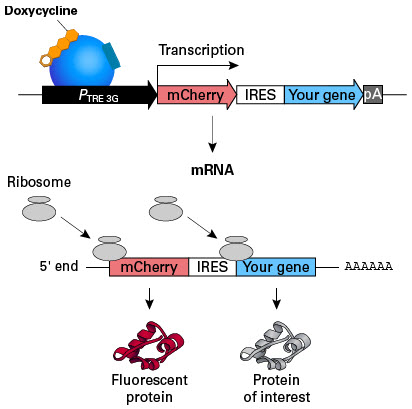 Tet-One or Tet-On 3G: which system should I choose?

For most applications, the Tet-One system is the best choice because it provides all components on a single vector, making it far easier to set up tightly controlled expression of your gene of interest. In that respect, Tet-inducible expression is as easy to use as any constitutive expression system. Tet-One is based on an all-in-one design that has shown up to 25,000-fold induction.

So when might a researcher choose a Tet-On 3G system instead? Even in a system that offers 25,000-fold induction, basal expression is not zero. Transcripts can be detected in sensitive assays such as qRT-PCR. If you need the absolute lowest level of basal expression (for highly toxic proteins for example) and have the willingness to screen clones after sequential delivery of the two vectors, it is possible with Tet-On 3G to find clones that have the lowest possible basal transcription.

Conditional mouse models are made by crossing two transgenic mouse lines: one expressing the Tet-On transactivator under the control of a tissue-specific promoter, and the other containing the gene of interest cloned behind a TRE promoter. Expression of the gene under study in the double-transgenic progeny is controlled by the presence or absence of Dox in the drinking water.

Hundreds of Tet-transgenic mouse lines are currently available throughout the scientific community or in mouse repositories. Although a Tet-On 3G mouse has not yet been created, we expect that the increased sensitivity of Tet-On 3G will be particularly advantageous for in vivo studies in tissues where high Dox concentrations are difficult to attain (e.g., brain).

With the greatly increased sensitivity of the Tet-On 3G systems, it is more important than ever that the serum you use for your studies is tetracycline-free. Only Takara Bio performs actual inducibility tests on a sensitive Tet-inducible cell line in order to provide an absolute guarantee that your serum is tetracycline-free.

Why is this necessary?

Cattle are routinely fed tetracyclines to guard against infection and build muscle mass. Any residual tetracyclines in serum will increase the basal expression from our highly sensitive Tet-On 3G systems.

Use of tetracycline-controllable expression systems (the "Tet Technology") is covered by a series of patents which are proprietary to TET Systems GmbH & Co. KG. There are specific licensing procedures that apply to for-profit companies and institutions. To determine whether you need a license to place an order, please log in to the Takara Bio website or contact the Takara Bio licensing group at 650.919.7320 or licensing@takarabio.com.