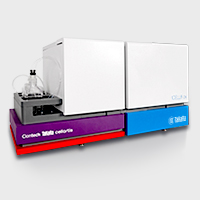 Unleash the power of imaging with single-cell automation

Confidence in your single-cell sequencing

It is critical that your single-cell isolation technology provides robust and confident isolation of individual cells. The ICELL8 single-cell systems employ an imaging station and proprietary CellSelect Software to ensure only single cells of your choice are analyzed. The imaging system is an automated optical system for rapid image capture, scanning every well across multiple parameters in minutes. CellSelect Software interrogates these images of each well and evaluates Hoechst dye staining for single-cell identification and propidium iodide (PI) for cell viability (Figure 1). A confidence score is determined for each well, and only those single cells meeting a sufficient confidence score will be selected for processing. Advanced settings in the software allow for fine-tuning of your detection parameters for each sample type and allow you to establish custom criteria for cell selection.

In the following data, we show an evaluation of mixed populations of human and mouse cells. This experiment demonstrates the power of the system to discretely isolate and identify individual cells with high fidelity (see Methods).

This mixed species experiment was conducted to demonstrate the single-cell isolation and confirmation capabilities of the ICELL8 system. The CellSelect Software was used to automatically identify 1,268 viable single-cell-containing wells. After a manual review of these wells, 652 single cells were selected for processing and sequencing (see Methods). On average, over 4,000 unique genes and 20,000 unique molecular identifiers per cell were sequenced. Analysis of this data identified five wells containing doublet cells expressing genes consistent with both the mouse and human genomes. These results suggest that the CellSelect Software in conjunction with manual review can increase the single-cell call accuracy to over 97% (Figure 2). This combined process provides a high assurance of single-cell isolation and high confidence to proceed with sample sequencing.

In a similar experiment using only automated calling by CellSelect Software, a low 1.9% occurrence of mixed-species doublets was achieved. The ability to rapidly and accurately identify individual cells through a routine, automated solution substantially reduces subjective bias and workflow time.

K562 cells, U-87 MG cells that express red fluorescent protein (U87-MG-RFP), NIH 3T3 mouse cells, and a mix of U-87 MG-RFP and NIH 3T3 cells were dispensed using the ICELL8 MultiSample NanoDispenser (MSND) into 5,184-nanowell ICELL8 chips containing preprinted 5,184 barcoded-oligo(dT) primers. Positive controls (K562 total RNA) and negative controls (1X PBS) were added to four wells each. Cells were washed in 1X PBS, counted and stained with Hoechst 33342 and propidium iodide, and imaged. After image acquisition and analysis, 90 U87MG human, 90 mouse, and 90 K562 (human) internal single-cell-containing wells for each of the single species controls, and 382 single-cell-containing wells of the two-species mix were down-selected from 1,268 viable single-cell-containing wells (candidates) identified by the CellSelect Software. Reaction mix containing MMLV reverse transcriptase was added to the selected individual-cell-containing wells based on a dispense map generated by CellSelect Software. The synthesized cDNAs were pooled and PCR-amplified. Next-generation sequencing (NGS) libraries were prepared using a transposase-based method (enriched for 3’ ends of mRNAs, Soumillion et. al. 2014) and sequenced using an Illumina HiSeq® 2500 in rapid run mode. Manual review of wells is an optional process of looking at individual well images and then selecting a box to either include or exclude that well from the downstream process. Incorporating this additional review is not required for well selection. However, it is a valuable option when precious samples are being evaluated, or it is critical that doublet contamination is minimized in the data set.

This powerful software quickly identifies, selects, and prepares only the cells you want. This walkthrough shows you how the software identifies live single cells, how you can manually triage your samples, and how to explore custom settings to maximize single cell isolation.

This powerful software quickly identifies, selects, and prepares only the cells you want. This walkthrough shows you how the software identifies live single cells, how you can manually triage your samples, and how to explore custom settings to maximize single cell isolation.