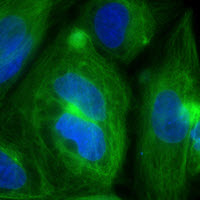 A powerful application of CRISPR/Cas genome editing technology involves the precise insertion or substitution of DNA sequences at specific genomic loci via the homology-directed repair (HDR) pathway. While this approach for engineering site-specific knockins is becoming increasingly popular, there are many ways to go about it, and its efficiency can vary widely depending on factors such as the target organism or cell type, the genomic locus, or the DNA template.

To maximize your likelihood for success with genome editing using HDR, our R&D team has compiled responses for the following frequently asked questions:

How do I design my HDR template?

Sequences corresponding to desired edits (insertions, substitutions, etc.) should be positioned in the middle of the HDR template. The exact sequence of the HDR template is independent of the position of the single guide RNA (sgRNA) or the cut site of the Cas9 nuclease, but efficient editing requires a template design in which the sequence(s) to be inserted are in relatively close proximity to the cut site of the Cas9-sgRNA ribonucleoprotein (RNP). (See FAQ below for more detail.)

The figure below demonstrates the design of HDR templates for engineering a single nucleotide substitution or a longer insertion, respectively, at corresponding genomic loci.

What are the advantages and disadvantages of using single-stranded vs. double-stranded HDR templates for engineering gene knockins?

It has been demonstrated that the use of ssDNA results in lower toxicity and reduced frequencies of random integration relative to dsDNA (Roth et al. 2018; Li et al. 2017), benefits which can be especially important when working with difficult-to-engineer cell lines. For example, if you are seeking to fuse a fluorescent protein to an endogenous gene expressed in your target cells, the percentage of fluorescent cells in the overall edited population could be used as a proxy for the frequency of successful HDR. However, some subset of these fluorescent cells could have resulted from random integration of the HDR template in frame with a gene other than the intended genomic target. (Panel 4B in this poster includes data from our R&D team demonstrating this phenomenon.) Such events are less probable when ssDNA is used as a template for HDR.

How do ssODNs differ from ssDNA? When is it better to use one vs. the other?

Single-stranded oligo deoxynucleotides (ssODNs) are produced routinely via chemical synthesis and can be used for engineering smaller edits (e.g., single nucleotide substitutions or shorter insertions <50 nt) as HDR templates with a total maximum length of 200 nt. For engineering larger insertions that necessitate HDR templates >500 nt, we recommend the use of ssDNA that can be produced with the Guide-it Long ssDNA Production System.

With ssODN or ssDNA, is it advantageous to use HDR templates that are homologous to the sense or antisense strand at the genomic target region?

Currently, there is no clear rule regarding the preferential use of sense or antisense ssDNA for HDR templates longer than 200 nt. However, in the case of shorter single-stranded oligodeoxynucleotide (ssODN) templates, template polarity has been found to have an effect on efficiency (Bollen et al. 2018).

What are optimal lengths for HDR template homology arms?

Is it helpful to use HDR templates that introduce silent mutations in the PAM sequence or sgRNA seeding region?

Cas9-sgRNA RNPs can re-cut a given genomic target following HDR if the editing outcome does not involve alteration of the PAM or sgRNA seeding region in the protospacer sequence, such that the RNP complex can still bind to the genomic target. Given this, a common strategy for increasing the percentage of successful HDR in coding regions is the incorporation of silent mutations in HDR templates that disrupt Cas9-sgRNA RNP binding without altering corresponding amino acid sequences.

If your PAM sequence is in a coding region and it can be silently mutated, it is advisable to do so to maximize the precision of genome editing and prevent subsequent Cas9 re-cutting and indel creation following HDR (Paquet et al. 2016). In seeking to mutate the PAM to disrupt RNP binding, please take into account other canonical PAM sequences (different from NGG) that can also be recognized less effectively by SpCas9 (i.e., NAG or NGA) (Zhang et al. 2014; Hsu et al. 2013) or Cas12a (i.e., TCTA, TCCA, or CCCA) (Yamano et al. 2017). Presented in the figure below are data demonstrating improved editing performance via incorporation of PAM mutations in HDR templates.

As mentioned above, the protospacer sequence can also be mutated. However, since some guide RNAs may tolerate a mismatch in the binding sequence, we recommend changing several bases as close to the PAM as possible in the seeding region of the sgRNA (Paquet et al. 2016; Kwart et al. 2017).

Does the HDR insertion site need to be directly next to the PAM?

It is highly recommended that the HDR insertion site is positioned within 10 nt upstream or downstream of the Cas9-sgRNA RNP cut site. For wild-type SpCas9, this is located 3–4 nucleotides upstream of the PAM. It has been demonstrated that there is an inverse relationship between HDR efficiency and the distance between the insertion site and Cas9-gRNA RNP cut site (Paquet et al. 2016).

What are the effects of chromatin configuration on HDR efficiency?

It has been demonstrated that nucleosomes inhibit target cleavage by SpCas9 in vivo, suggesting that Cas9 activity is influenced by chromatin structure in addition to the inherent activity of a given sgRNA (Yarrington et al. 2018). Although DNA sequence is a significant determinant of site-specific indel profiles, it has been shown that packaging of DNA into chromatin may influence editing efficiency and the relative frequency of indels at a given locus (Chakrabarti et al. 2018). On the other hand, using imprinted genes as a test case, outcomes of gene editing events (i.e., the balance between HDR vs. NHEJ) were shown to be independent of chromatin state (Kallimasioti-Pazi et al. 2018).

What are additional methods for improving HDR efficiency?

The development of novel methods for improving HDR efficiency is currently a major focus area in the genome editing field. Toward this end, the following approaches have shown promise:

How can I increase the frequencies of edited clones with only one modified allele and the other one encoding the wild-type sequence?

One of the most common genome editing outcomes is the introduction of an SNP in one allele and an indel in the other, such that it is especially challenging to obtain clones in which only one allele is modified (encoding for the desired edit) and the other one is unedited. To more efficiently obtain clones with SNP/wild-type heterozygosity, researchers have developed two strategies (Paquet et al. 2016):

Learn how to design sgRNA sequences for successful gene editing.

An overview of tools available for each step in a successful genome editing workflow.

Delivery of Cas9 and sgRNA to mammalian cells using a variety of innovative tools.

Watch this webinar to learn how you can perform genome-wide lentiviral sgRNA screens easily.

Get answers to frequently asked questions and view a video explaining the enzymatic assay.