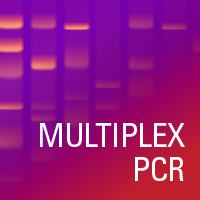 Multiplex PCR is a critical tool when reaction cost or sample availability is limiting and can result in considerable savings in time and effort compared to single PCR reactions. However, it is challenging to optimize reaction conditions to achieve uniform amplification of many targets in a single reaction. SuperPlex Premix combines the power of a multiplex assay with the convenience of a master mix and enables:

Multiplex PCR enables researchers to obtain more answers in fewer reactions and a shorter timespan than singleplex PCR, because many targets are amplified in a single PCR reaction. This makes multiplexing especially valuable in applications where reaction cost or sample availability is limiting, including mutation detection, pathogen identification, clinical diagnostics research, and infectious disease screening.

Speed and efficiency are important factors to consider when developing molecular diagnostic assays, in order to process large numbers of samples and provide actionable results in a timely manner. Every improvement in the workflow leads to a significant time savings, and eliminating pipetting steps has the added benefits of reducing the potential for contamination and error and minimizing repetitive strain-induced injury. Simplifying procedures also enables better standardization between users, which can be crucial when screening projects are scaled up for widespread use.

However, while multiplex PCR reactions are very powerful, they are not easy to set up. They require lengthy optimization—and the higher the multiplex, the more complex the setup. Other key challenges include primer design and finding PCR conditions that work for all primer pairs (which usually have different amplification efficiencies). To simplify multiplex PCR assays and streamline their workflows, we have developed a new PCR master mix—SuperPlex Premix—which combines the power of multiplex PCR with the convenience of a master mix. SuperPlex Premix is a hot-start 2X PCR master mix based on our high-yield Titanium Taq DNA polymerase, which is ideal for multiplex PCR as well as for high-yield singleplex PCR. The premix contains all the reagents necessary for multiplex PCR and is easy to use—just add primers, sample, and water.

In our first experiment, we compared the performance of SuperPlex Premix to four other commercially available master mixes marketed for multiplex PCR in a 20-plex reaction. SuperPlex Premix yielded the most uniform amplification across all target sizes (20 amplicons from the human CFTR gene, ranging from 70–697 bp) and each target was clearly visible on the gel (Figure 1, Lane 1). Three of the other master mixes—KAPA (Lane 2), Invitrogen (Lane 3), and Qiagen under two reaction conditions (Lanes 5 and 6)—were also able to amplify all 20 targets. However, amplification was not uniform across the different primer pairs, with weaker amplification observed for the larger and smaller targets. NEB's multiplex master mix (Lane 4) was unable to perform the 20-plex reaction.

In addition to providing the most uniform amplification, SuperPlex Premix required minimal optimization and could amplify all twenty primer pairs in the reaction.

Because multiplex PCR is done specifically to obtain a large quantity of data in an efficient manner, we designed SuperPlex Premix with total assay time in mind, minimizing reaction setup time and total time to results. When comparing vendor cycling conditions, SuperPlex Premix had the shortest PCR cycling time, with significant time savings over each competitor premix (Table I) as well as stellar performance as shown in Figure 1.

In an effort to decrease assay duration, each master mix was tested in the 20-plex CFTR assay using the shorter PCR cycling conditions recommended for SuperPlex Premix. The results in Figure 2 demonstrate superior performance by SuperPlex Premix: the NEB and Qiagen master mixes failed to give amplification products (Lanes 4–6) while the KAPA2G and Invitrogen master mixes gave reduced intensity, smears, and amplicon dropouts (Lanes 2–3).

We have demonstrated that SuperPlex Premix outperforms four other PCR premixes (also marketed for multiplex PCR) in terms of amplification uniformity and speed: SuperPlex Premix provided the most even amplification intensity for all amplicons in a 20-plex reaction targeting the CFTR gene, and required the shortest PCR cycle time to achieve these results. This additional speed can enable the researcher to accomplish more in less time.

Together, the characteristics of speed, uniformity, and ease of use make SuperPlex Premix a high-performing choice for multiplex PCR.

To evaluate the performance of SuperPlex Premix in multiplex PCR, we compared the amplification uniformity and PCR cycle times of SuperPlex Premix and four other commercially available master mixes marketed for multiplex PCR. A panel of 20 targets for the cystic fibrosis gene (Table II) was designed for this comparison, ranging from 70–697 bp in size. 15 of the primer sets were based on a previous publication (Shuber et al. 1995) and 5 of the primer sets were designed using the Primer3 tool. All PCR reactions were performed using 10 ng of human genomic DNA as template with all 20 primer pairs. 18 µl of each PCR product was separated on a 4% agarose gel in 1X TAE buffer at 80 volts for 200 min and visualized with ethidium bromide staining.

In the first experiment, the 20-plex PCRs were set up using manufacturer-suggested PCR conditions as listed in Table III. For SuperPlex Premix, primers targeting amplicons less than 300 base pairs in length were used at a final concentration of 300 nM while those targeting amplicons longer than 300 bp were used at 150 nM. For other master mixes, all primers were used at the concentrations specified by the manufacturer (200 nM for KAPA2G, NEB, and Qiagen master mixes; 100 nM for Invitrogen).