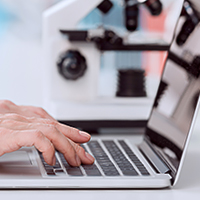 4 factors to consider for TCR/BCR profiling

B cells are essential parts of the adaptive immune response, expressing B-cell receptors (BCRs) on their surface, thus enabling the recognition of unique molecular patterns in pathogens. Understanding the profiles of BCRs (i.e., the diversity of receptors and clonotypes) can not only aid in gaining insights into the adaptive immune response in healthy individuals but also in those with a wide range of diseases. Accurate determination of the clonotypes and isotypes expressed by the immune system will aid in a complete picture of the B-cell repertoire.

Current next generation sequencing (NGS) approaches for profiling B-cell repertoires yield valuable insights into the adaptive immune response and antibody engineering. There are two major approaches used in profiling B-cell repertoires: multiplex PCR and 5' RACE combined with NGS. While multiplexing allows you to amplify multiple BCR genes in one reaction, it may prove challenging with regard to sensitivity, specificity, and biases in amplification of certain sequences, all of which can lead to difficulties in accurate and reproducible identification of isotypes.

The new SMARTer Human BCR IgG IgM H/K/L Profiling Kit leverages SMART technology (Switching Mechanism at 5' End of RNA Template) and pairs NGS with a 5' RACE approach in order to provide a sensitive, accurate, and optimized approach to BCR profiling (Figure 1A). Contrary to systems that use multiplex PCR, the 5'-RACE method does not require any prior knowledge of the sequences comprising the 5' end of BCR transcripts. The 5'-RACE method reduces variability and allows for priming from the constant region of IgG and IgM heavy or light chains (Figure 1B). The benefits of 5' RACE with gene-specific amplification come together in this highly sensitive and reproducible method for profiling B-cell repertoires, and allow you to capture complete V(D)J variable regions of BCR transcripts. Downstream sequencing allows for accurate identification of top clonotypes and reliable assignment of isotype in a majority of cases.

This new profiling kit also includes unique molecular identifiers (UMI). The BCR UMI Oligo contains 12 random nucleotides, which are incorporated into the cDNA during the template-switching step. When used with our Takara Bio Immune Profiler Software, PCR duplicates and errors can be detected and removed for more accurate and reliable clonotype calling and quantification.

To evaluate the sensitivity of the new SMARTer Human BCR IgG IgM H/K/L Profiling Kit, libraries were prepared from 1 ng, 10 ng, and 100 ng of human CD19+ B-cell total RNA. As shown in Figure 2, clonotype counts from IgG, IgM, IgK, and IgL sequences consistently increase as the RNA input amount increases. Similar data were obtained when using RNA extracted from PBMCs with inputs ranging from 10 ng to 1 μg. These data clearly indicate that the kit is robust enough to accommodate samples with very little input and/or very high complexity.

In addition to high sensitivity and the ability to accommodate a large range of sample complexity, this protocol also shows high reproducibility. Indeed, when technical replicates were performed with 1 μg of PBMC RNA extracted from a single donor, the correlation between overlapping clones was excellent, with a Pearson correlation of 0.98 and Spearman correlation of 0.72 (Figure 3).

In order to further test the reproducibility and limit of detection of the kit, we spiked a serial dilution of RNA extracted from four B-cell-derived carcinoma cell lines into 100 ng of PBMC RNA. As shown in Figure 4, we were able to detect all four cell lines at spike-in levels as low as 1 pg. The quantities of the four cell lines at different spike-in levels detected in the 100-ng background of the PBMC RNA profile are perfectly matched to the expected ratios. These results further demonstrate the high sensitivity and robustness of the assay.

Figure 4. Successful identification of low-abundance clones. 1 ng, 100 pg, 10 pg, and 1 pg of each of the four cell lines (Raji, TIB190, TIB196, and CRL2974) were spiked into 100 ng of a single donor's PBMC RNA. The plot above shows calculated correlations between spike-in RNA proportions (Log10) and detected frequencies (Log10) for each cell line.

Significant impact of biological variation on the number of clonotypes detected

The number and status of B cells in peripheral blood circulation vary from person to person. We tested 10 ng of PBMC RNA from eight different donors with our new profiling kit. A total of 32 libraries from these eight donors (all four chains for each sample) were pooled and sequenced. We found that clonotype counts were indeed very different from sample to sample, as shown in Figure 5. These data also demonstrated the large range of clonotype counts that the kit can accommodate—the smallest clonotype count identified in one library was 53, while the largest was around 4,200. The on-target rates of these libraries ranged from 75% to 95%, and 19 out of the 32 libraries had on-target rates over 85% (data not shown). Different types of biological samples were also tested and the recommended input ranges and expected outcomes are summarized in Table I.

The incorporation of unique molecular identifiers (UMIs) is another great feature of the new human BCR profiling kit. UMIs are often used to remove molecular duplicates and sequencing errors resulting from PCR. As shown in Figure 6A, without UMI-based correction, the number of clonotype counts continuously increased with an increase in sequencing depth (purple line), but was likely due to the accumulation of PCR and sequencing errors. However, when UMI-based correction was included, the increase in clonotype counts reached a plateau phase after reaching a sequencing depth of 100K reads per library. Not only did the analyses with 100K and 1,500K reads have similar numbers of clonotype counts, but their clones also largely overlapped, as shown in Figure 6B. Collectively, these results suggest that for SMARTer human BCR libraries generated from 10 ng PBMC RNA, 100K reads per library is sufficient to capture the majority of clones.

CD19+ B-cell RNA was purchased from Miltenyi Biotech (Cat. # 130-093-169). PBMC RNA from single donors was purchased from Biochain (Cat. # R1234148-10) in addition to in-house RNA which was extracted from PBMC cells acquired from AllCells. RNA was extracted using the Macherey-Nagel NucleoSpin RNA Kit. B-cell carcinoma cell lines Raji, TIB190, TIB196, and CRL2974 were purchased from ATCC and cultured as they suggested. RNA from each cell line was then extracted using the same Macherey-Nagel NucleoSpin RNA Kit as above. 1 ng, 100 pg, 10 pg, and 1 pg each of RNA from the four cell lines (Raji, TIB190, TIB196, CRL2974) were spiked into 100 ng of a single donor's PBMC RNA.

All libraries containing IgG and IgM heavy and light chain sequences were generated using the SMARTer Human BCR IgG IgM H/K/L Profiling Kit, as per the main protocol in the user manual (without the multiplexing option in Appendix A). Libraries were produced using first-strand cDNA as a template in three different PCRs for heavy chain and kappa and lambda light chains. The products of these PCRs were used as templates in a set of nested PCRs, one for each chain. Following purification and size selection, libraries were validated using the Agilent 2100 Bioanalyzer. All libraries were sequenced on an Illumina MiSeq platform with 600-cycle V3 cartridges (Cat. # MS-102-3003).