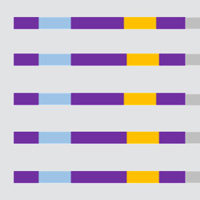 A next-generation sequencing (NGS) library preparation system must have a simple, streamlined workflow accommodating a range of sample inputs without compromising accuracy. ThruPLEX DNA-Seq HV satisfies these requirements, with a complete, fast, and accurate NGS library preparation system that enables the generation of complex libraries. The kit's unique single-tube workflow makes this one of the fastest, most consistent, and highest-throughput library preparation workflows on the market. Additionally, the use of a single tube helps prevent loss of precious samples by eliminating the need for time-consuming bead purification found in competitor kits (Figure 1). Furthermore, ThruPLEX DNA-Seq HV decreases hands-on time by eliminating the need for adapter dilution and protocol optimization (Figure 1).

By increasing the starting input volume (30 µl) and range of input (up to 200 ng), we have eliminated the need for concentrating inputs while producing high-complexity libraries. The libraries generated by ThruPLEX DNA-Seq HV can be used directly for whole-genome sequencing applications or enriched using a custom panel for the leading target enrichment platforms.

The ThruPLEX DNA-Seq HV workflow consists of three simple addition steps that take place in a single well or PCR tube—with just 15 minutes of hands-on time—to yield indexed libraries from fragmented DNA within two hours. Increasing the input volume (30 µl) and range of input (up to 200 ng) at the start of the protocol enables the generation of higher-complexity libraries for sequencing or target enrichment. Generation of high-complexity libraries is critical to achieving even coverage throughout the genome for whole-genome sequencing (Figure 2). When compared to NEBNext Ultra II, libraries generated using ThruPLEX DNA-Seq HV show coverage much closer to ideal normalized coverage.

Processing of clinical research materials for long-term storage may include fixation with formalin. Exposing samples to formalin can lead to significant damage of the nucleic-acid content, which is often present in limited quantities. Due to this damage, the construction of libraries can prove challenging and, therefore, generally requires a kit with a robust repair mechanism to produce enough post-PCR product for target enrichment. ThruPLEX DNA-Seq HV was designed to accommodate a large input volume and a higher amount of starting material, which improves coverage and mutation detection by increasing the complexity of the input. Another important consideration for the confident calling of low-frequency mutations is achieving even coverage throughout the genome in order to ensure optimal read depth at all relevant loci. To facilitate the necessary even coverage, our system has been optimized for improved coverage uniformity across a broad range of inputs with varying levels of damage and GC contents.

We compared the performance of ThruPLEX DNA-seq HV and NEBNext Ultra II (Figure 3) on libraries generated in triplicate with 50-ng and 5-ng inputs of Horizon DNA references, including formalin-compromised material with severe damage, as well as with 30-ng and 5-ng of formalin-fixed paraffin-embedded material. ThruPLEX HV libraries outperformed NEBNext libraries in mean target coverage for the formalin-compromised DNA and exhibited comparable mean target coverage for the FFPE samples (Figures 4). Both kits performed similarly in the detection of positive variants, on the two types of formalin-treated samples (Figure 5).

ThruPLEX DNA-Seq HV is a simple, fast, accurate system with only three addition steps that can be completed in a single tube in two hours. The ThruPLEX DNA-Seq HV library preparation kit for Illumina sequencing elevates the ThruPLEX family by increasing starting input volume and expanding the amount of starting material when compared to previous ThruPLEX DNA-seq kits. Along with these improvements, ThruPLEX DNA-Seq HV retains the coveted ThruPLEX single-tube workflow with no intermediate cleanup steps. Through workflow optimization and reformulation, ThruPLEX DNA-Seq HV outperforms NEBNext Ultra II in coverage of regions with increasing GC content as well as in the detection of variants in both FFPE and cell-free DNA.

Amplified libraries were purified with AMPure beads and pooled for target capture with the IDT's xGEN Pan Cancer Panel covering 800 kb of the human genome.