Pathogen detection in patients and food

The ability to monitor and detect viral, bacterial, and fungal pathogens in a variety of samples, including human and agricultural, is critical. An ideal workflow would be able to rapidly profile a high number of targets in multiple samples with precision and reproducibility. As such, research into utilizing high-throughput qPCR has emerged as a potential improved methodology for pathogen detection.

One area where the SmartChip Real-Time PCR System has been utilized is for quick and accurate identification of microorganisms causing imbalance in Bacterial Vaginosis (BV). BV is of critical importance for women's health research laboratories, as BV affects over 21 million women in the United States annually. While the specific causes of BV are unknown, identifying microorganisms in samples can lead to a deeper understanding of the disease. We developed a panel that has been utilized by BV researchers to aid in these efforts. The BV panel contains three controls and identifies 19 different pathogens utilizing high-throughput qPCR analysis (Table I).

The power of using the BV panel on the SmartChip system is in the ability screen 144 samples across all 22 assays with just 30 minutes of hands-on time, in ~six hours of total run time. Utilizing the full SmartChip system's output, researchers can analyze up to 432 samples in a single day. Thus, the SmartChip system enables a simple, reproducible workflow that provides sensitive, specific, and accurate identification of microorganisms in a high-throughput platform that decreases the cost per sample.

Another research area that has utilized the SmartChip Real-Time PCR System's strengths is fungal detection in crops. A large majority of the crops grown as part of the food supply in North America (NA) are susceptible to various fungal diseases that can devastate production by lowering yield and grain quality. Fusarium head blight (FHB) is one such fungal disease that has been studied extensively with the SmartChip system. FHB can infect a wide variety of crops, including wheat, barley, corn, and oats. Despite being first identified in the late nineteenth century, FHB first started appearing in NA during the mid-twentieth century and has continued to slowly expand. FHB is typically spread via wind and planting of infected seeds following periods of heavy rainfall in affected areas. Thus, it is critical to accurately identify and monitor FHB in a large number of samples to determine where it is currently present and also prevent rapid expansion into other regions.

FHB is caused by four species of fungus: Fusarium graminearum, Fusarium culmorum, Fusarium avenaceum, and Fusarium crookwellense. In some cases, infection can be detected visually. However, visual inspection can be an inefficient and time-consuming method for monitoring FHB. Furthermore, FHB may not be visible until late stages of infectivity, a point at which it is too late to prevent the spread to other nearby crops. Thus, high-throughput qPCR is an amenable solution to rapid and sensitive detection of FHB in a large number of crop samples. The SmartChip system has specifically allowed the assaying of a wide range of fungal species in multiple samples to further increase throughput and speed up analysis for FHB research groups. 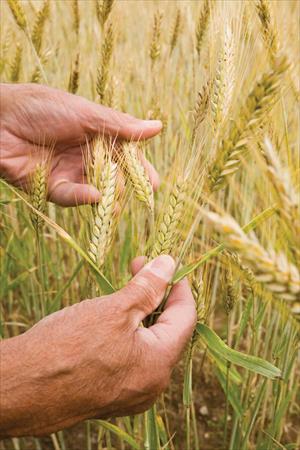