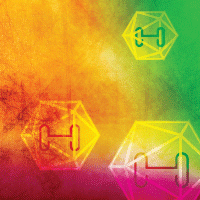 When preparing AAV particles for in vivo transduction, purity and titer are critical for achieving high transduction efficiency. Purification of the virus is essential when it is to be used in vivo, as crude viral lysate can be toxic to the target tissue/cells. In addition, having an accurate estimation of viral titer ensures that sufficient virus is delivered and helps maintain consistency between experiments. In this example, AAV2 particles for in vivo transduction of brain cells were generated using the AAVpro series, a set of products for generating high titers of transduction-ready, recombinant AAV particles. Using this system, AAV2 particles were successfully used for in vivo delivery of a bright fluorescent marker to cells in a very specific brain region in mouse.

Learn more about the AAVpro workflow »

Strong green fluorescence was observed throughout the striatum (left panel). Also, ZsGreen1 expression was detected in the neurons of the globus pallidus (right panel).

The purity and titer of AAV particles is important for achieving high transduction efficiency into individual animals. AAV2 particles obtained using the AAVpro system could be used for efficient in vivo transduction into mouse brain.

AAV2 particles were prepared using the AAVpro Helper Free System (AAV2) and pAAV-ZsGreen1 according to the recommended protocol. The Helper Free System provides a unique method for the preparation of high-titer AAV particles that does not require the use of a helper virus. This kit includes plasmids encoding the factors necessary to prepare recombinant AAV particles by transfection of HEK 293T cells. pAAV-ZsGreen1 is an AAV vector that can be used to deliver an exceptionally bright green fluorescent protein to target cells.

The purified AAV2-ZsGreen1 particles were diluted to 1.86 × 1012 vg/ml in PBS, and 5 µl was administered to the brains of mice at points to the left and right of the striatum using a stereotactic surgical technique. After 27 days, anesthetized mice were perfused with fixative (a solution containing 4% paraformaldehyde), and brains were removed. After freezing, coronal thin sections were prepared. Slices were imaged by fluorescence microscopy.