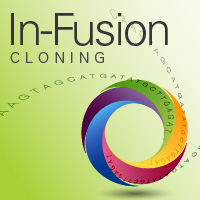 In-Fusion Cloning technology allows ligation-independent, directional cloning of PCR products into any vector, at any site of linearization (Figure 1). This seamless cloning reaction takes as little as 15 minutes and enables you to build your final constructs in just one step, even those of high complexity (Chen et al. 2014, Lestini et al. 2013).

For many years, In-Fusion HD Cloning kits have enabled countless scientists to push the boundaries of their research with streamlined technology that overcomes a multitude of cloning obstacles: solving synthesis challenges with easy multiple-insert cloning, successfully cloning directly into large expression vectors, and improving their cloning throughput for antibody development.

As we continually strive to provide researchers with a better lab experience through robust, streamlined reagents and tools, our scientists once again focused in on cloning, a critical starting point for many applications. These efforts brought forth In-Fusion Snap Assembly—a new cloning master mix that offers improvements in efficiency and consistency, while still keeping all the renowned benefits of In-Fusion HD Cloning kits.

In-Fusion Snap Assembly follows the same protocol as In-Fusion HD kits, with the cloning master mix fusing PCR-generated sequences and linearized vectors efficiently and precisely, utilizing a 15-bp overlap at their ends (Figure 1). The In-Fusion master mix removes nucleotides from the 3' end of linear DNA strands, allowing complementary base pairs between two pieces of DNA to anneal and fragments to join, in just 15 minutes. The plasmid is then used to transform competent cells, where covalent bonds will form between the DNA fragments. Over 95% of the colonies obtained with this protocol will contain the right construct.

Our scientists compared the performance of In-Fusion Snap Assembly and In-Fusion HD kits side by side for a wide range of applications. PCR primers were identical since both technologies use the same protocol. The high-fidelity PCR enzyme, DNA cleanup kit, and competent cells were likewise the same; only the cloning master mix differed between the two. After transformation and plating, 10 colonies were analyzed by Sanger sequencing to determine the cloning accuracy. Each experiment was done in triplicate.

Both technologies lead to thousands of colonies and 90–100% accuracy when cloning a single fragment in a regular or an adenovirus vector, doing site-directed mutagenesis, or deleting an entire sequence of a vector (data not shown).

In addition to our own in-house experiments, we are pleased to see that results from outside researchers have also been successful:

The [In-Fusion Snap Assembly] worked beautifully. I had a really tricky plasmid to clone (a lot of repetitive promoters). Even though I only did a 1-piece insertion it worked way better than [In-Fusion HD] (which I'm obsessed with). I ran an easier [In-Fusion Snap Assembly reaction] last night with a digested backbone and had a lawn of colonies (with very low background). [...] I'm very pleased with the results."

The performance of NEBuilder HiFi DNA Assembly and In-Fusion Snap Assembly were tested side-by-side with vectors linearized by inverse PCR or restriction digest. For each experiment, PCR primers for the inserts and vector (when applicable) were designed according to each product's specifications, using either our online primer design tool or SnapGene software. After transformation and plating, 20 colonies were analyzed by either Sanger sequencing or colony PCR to determine the cloning accuracy. Each experiment was done in triplicate.

When using inverse PCR for vector linearization, In-Fusion Snap Assembly led to twice as many colonies as NEBuilder HiFi for cloning a single 3.8-kb insert or a 34.2-kb adenovirus insert into a 2.7-kb vector, with an accuracy >95% (Figure 3).

In-Fusion Snap Assembly is a clear upgrade compared to existing seamless cloning methods. In-Fusion Snap Assembly provided significantly more colonies for multiple insert cloning when compared to In-Fusion HD. Results were also more consistent, guaranteeing reliable data for more complicated and/or higher-throughput cloning projects. Scientists who put this new technology to the test saw satisfying results with their tricky cloning experiments and were able to unlock doors that were too difficult to open until now.

In-Fusion Snap Assembly technology was the clear winner over NEBuilder HiFi DNA Assembly in terms of overall efficiency, yielding up to 16X more colonies, with a cloning accuracy above 95%. This system enables researchers to obtain the right clone, every time, regardless of the application. Moreover, the recommended incubation time with In-Fusion Snap Assembly is 1/4 that of NEBuilder HiFi when cloning multiple inserts, allowing for an overall shorter protocol. In-Fusion Snap Assembly is also more versatile; one kit can be used for single- or multiple-insert cloning, as well as site-directed mutagenesis. Scientists can expand their experiments without the hassle of buying different products for different applications.

Besides being available in a wide range of master mix reaction sizes, In-Fusion Snap Assembly is also available in bundles, with everything needed for a cloning experiment, including high-fidelity PCR polymerase, cloning master mix, competent cells, and reagents to treat PCR products prior to cloning. Where the competing technology provides the bare minimum, In-Fusion Snap Assembly bundles fully equip the researcher for all steps, ensuring a high out-of-the-box success rate and allowing a direct value assessment of the true total cost of the experiment.

Five different inserts (ranging in size from 405 bp to 1,005 bp) were simultaneously cloned into a 2.7-kb vector previously linearized by inverse PCR using In-Fusion HD and In-Fusion Snap Assembly. Each cloning reaction was performed in triplicate. Amplification primers and all reagents, except for the cloning master mixes, were the same between the two systems. Stellar Competent Cells were transformed with each cloning reaction. Transformed cells were plated on LB plates with ampicillin. Cloning accuracy was determined via Sanger sequencing analysis of 10 colonies from each replicate. All protocols were performed according to each product's user manual. All primers were designed with our online primer design tool.

A single 3.8-kb insert or 34.2-kb adenovirus insert was cloned into a 2.7-kb vector linearized via inverse PCR. Cloning reactions were performed in triplicate with both In-Fusion Snap Assembly and NEBuilder HiFi DNA Assembly. Primers were designed according to the manufacturers' specifications. Stellar Competent Cells were transformed with In-Fusion Snap Assembly cloning reactions. NEB 5-alpha Competent E. coli (High Efficiency) cells were transformed with NEBuilder HiFi DNA Assembly cloning reactions. All transformed cells were plated on LB plates with ampicillin. Cloning accuracy was determined via Sanger sequencing analysis (for the 3.8-kb insert) or colony PCR (for the adenovirus insert) of 20 colonies from each replicate.

To assess performance when using restriction enzymes for vector linearization, a single 3.8-kb insert was cloned into a standard cloning vector linearized by HindIII to create 5' overhangs, SmaI to create blunt ends, or PstI to create 3' overhangs. These cloning reactions were performed in triplicate with both In-Fusion Snap Assembly and NEBuilder HiFi DNA Assembly. Primers were designed according to the manufacturers' specifications. Stellar Competent Cells were transformed with In-Fusion Snap Assembly cloning reactions. NEB 5-alpha Competent E. coli (High Efficiency) cells were transformed with NEBuilder HiFi DNA Assembly cloning reactions. All transformed cells were plated on LB plates with ampicillin. Cloning accuracy was determined via Sanger sequencing analysis of 20 colonies from each replicate.