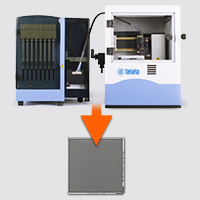 NOTE: The products featured here are for Research Use Only. Not for use in diagnostics procedures.

Getting ahead of the COVID-19 pandemic entails rigorous research that can evolve as quickly as the virus. To accelerate this research, we need high-throughput assays for detecting SARS‑CoV‑2 from a large number of samples with precision, reproducibility, and speed. Other critical factors for reliable SARS-CoV-2 detection include minimal false positives and negatives, accurate capturing of transcripts down to single-digit copy numbers, reduced hands-on time, and maximizing the number of samples processed per day.

The SmartChip SARS‑CoV‑2 assay follows a simple workflow with ~30 min of hands-on time and ~4 hours of total processing time per 384 samples. The oligonucleotide primer and probe sequences used in this assay are identical to the primers targeting the viral nucleoprotein (N) gene used in the CDC’s FDA-approved assay for detection of SARS‑CoV‑2. The assay specifically detects the SARS‑CoV‑2 nucleoprotein genes (N1 and N2).

RNA isolated and purified from upper respiratory samples are dispensed into 5,184-well chips along with the assay mix, reverse transcribed to cDNA, and amplified using the SmartChip Real-Time PCR Cycler (Figure 2).

The assay sensitivity was measured by determining the limit of detection (LoD), the lowest detectable concentration of SARS‑CoV‑2 RNA at which approximately 95% of all (true positive) replicates test positive. Using a limiting dilution of characterized, heat-inactivated SARS‑CoV‑2 virus of known concentration, the initial LoD was estimated to be 16 copies/µl (Table 1).

The initial LoDs were confirmed using 20 extracted replicates of the inactivated SARS‑CoV‑2 virus at the presumed LoD (16 copies/µl) and 20 replicates at 2-fold below the presumed LoD (8 copies/µl). For each replicate, a positive result for N1 and N2 was called if at least 4/5 wells showed amplification curves (<Ct 33.5 for both N1 and N2 assays); for RP, the cutoff was 1/2 wells (<Ct 33.5). Based on the result for the 20 replicates, the LoD was confirmed at 16 copies/µl—the lowest concentration where ≥95% (≥19/20) of the replicates were positive.

The analytical specificity of the SmartChip Real‑Time RT‑PCR SARS‑CoV‑2 assay was demonstrated in silico following the instructions for the 2019-nCoV Kit from the CDC. The analysis evaluated the primer and probe homology with 43 organisms and viruses listed in the FDA-recommended list. Based on this analysis, a significant amplification of non-target sequences that could result in cross-reaction (false-positive results) or interference (false-negative results) was considered unlikely to occur.

The SmartChip Real‑Time RT‑PCR SARS‑CoV‑2 assay uses primers and probes identical to those recommended by the CDC that target specific genomic regions of the SARS‑CoV‑2 N gene (N1 and N2), unique to SARS‑CoV‑2. Inclusivity was determined by mapping the primers and probes to all SARS‑CoV‑2 genomes available and demonstrated to be acceptable per the amended CDC EUA (June 20, 2020).

Sixty pre-screened nasopharyngeal samples from individuals showing symptoms consistent with COVID-19 were acquired from a third party, 30 of which were confirmed positive, and 30 confirmed negative for the presence of SARS‑CoV‑2 using a commercial COVID-19 test (EUA202821). Technologists at Takara Bio performing the procedures were blinded to the SARS‑CoV‑2 status of the samples. The results of Takara Bio assay and third-party studies (reference assay) are summarized in Table 3. The SmartChip Real‑Time RT‑PCR SARS‑CoV‑2 assay showed a Positive Percent Agreement (PPA) and Negative Percent Agreement (NPA) of ≥95% in this study (Table 4).

The N1, N2, and RP primers and probes used in the assay were ordered from Integrated DNA Technologies (Cat. # 10006821–10006829). The primer sequences were identical to the N1 and N2 primers/probe sequences used in the FDA authorized original CDC 2019-nCoV real-time RT-PCR Diagnostic Panel.

When all controls exhibit the expected performance, the criteria shown in the table below were used to interpret the sample results:

Sixty pre-tested nasopharyngeal samples from individuals showing symptoms consistent with COVID-19 infection were acquired from a third party, 30 of which were confirmed positive and 30 confirmed negative for the presence of SARS-CoV-2 using a commercial test (EUA202821) as the reference assay. These samples were stored in VTM/UTM and then frozen before shipment to Takara Bio. Technologists performing the procedures were blinded to the SARS-CoV-2 status of the samples.