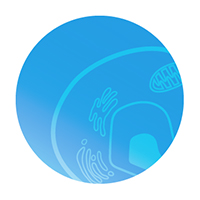 An important requirement for many in vitro and in vivo experiments is the quick and accurate assessment of cell viability and proliferation. Cell viability can be assessed by quantifying the number of living cells in a sample, and there are three main techniques to quantify viable cell number. The most direct way is to count living cells using a hemocytometer and assessing either cell morphology or cellular permeability of Trypan Blue and/or Eosin Y dyes. However, this method can be cumbersome, time-consuming, and is prone to sampling errors.

Cell viability can also be assessed by measuring cellular metabolic activity. Tetrazolium salts (such as MTT, XTT, and WST) are cleaved into colored formazan products by viable cells, and there is a linear relationship between the amount of formazan produced and the number of viable cells in a sample. The formazan formed in the MTT assay is not water-soluble and requires a solubilization step. While the formazan produced by the XTT assay is water soluble, it has comparatively lower sensitivity and dynamic range than WST. Due to these considerations, the WST-1 assay has emerged as the optimal choice due to its water solubility, high dynamic range, and superior sensitivity.

An additional consideration is that these assays make no distinction between resting and actively dividing cells. Cell proliferation assays, such as clonogenic assays or quantification of DNA synthesis by measuring incorporation of a labeled nucleotide, may be used to determine changes in cell number. Another, highly sensitive, approach is to use the WST-1 assay across a variety of time points. As the WST-1 assay is non-toxic and requires no washing/harvesting of cells, it can be used over a specified time course to monitor changes in cell number as a result of growth factors, cytokines, cytotoxic compounds, etc.

The final method to assess cell viability relies on the quantification of cytoplasmic and membrane enzymes such as lactate dehydrogenase (LDH). LDH is a stable cytoplasmic enzyme, so its detection indicates that the cell's membrane has been compromised (i.e., the cell is apoptotic or necrotic). This method measures cytotoxicity by quantifying LDH levels (which demonstrate a linear correlation with the number of dead, rather than viable, cells) in cell cultures.

To leverage the strength of these assays, Takara Bio offers the Premix WST-1 Cell Proliferation Assay System and the LDH Cytotoxicity Detection Kit.

The Premix WST-1 Cell Proliferation Assay System has been specifically engineered to enable you to:

After WST-1 is added to a cell culture, it is cleaved to generate a soluble formazan dye (Figure 1) by succinate-tetrazolium reductase (EC 1.3.99.1; Figure 2), a component of the mitochondrial respiratory chain that is active only in viable cells. The total amount of formazan dye produced is proportionate to the number of viable cells in a sample. Thus, by measuring the formazan dye's absorbance on a plate reader, the number of metabolically active (viable) cells in the medium can be quantified.

In the first experiment, CTTL-2 (murine T) cells were incubated with increasing concentrations of human interleukin-2 (IL-2). Cells were seeded at a concentration of 4 x 103 cells/well in 100 µl of RPMI 1640 culture medium containing 10% heat-inactivated fetal calf serum and supplemented with 2 mM L-glutamine, 1mM Na-pyruvate, 1X non-essential amino acids, and 50 µM 2-mercaptoethanol on a 96-well plate. Sterile human IL-2 (10,000 U/ml; 5µg/ml) was added to wells in increasing concentrations between 0.005–25 ng/ml. The cells were incubated for 48 hours at 37°C and 5% CO2. 10 µl of Premix WST-1 was added to each well and incubated at 37°C and 5% CO2 for 4 hours. Absorbance was measured on a plate reader and plotted against IL-2 concentration (Figure 3). The data demonstrates a dose-dependent increase in cell proliferation in response to IL-2 (a known stimulator of T cells).

In the next experiment, WEHI-164 (mouse fibrosarcoma) cells were incubated with increasing concentrations of human tumor necrosis factor-α (TNF-α). Cells were seeded at a concentration of 5 x 104 cells/well in RPMI 1640 containing 10% heat-inactivated fetal calf serum and supplemented with 2 mM L-glutamine and actinomycin C1/D (1 µg/ml) on 96 well-plates. Sterile human TNF-α (10 mg/ml) was added to wells in increasing concentrations between 0.001–0.5 ng/ml. The cells were grown for 24 hours at 37°C and 5% CO2. 10 µl of Premix WST-1 was added to each well and incubated for 4 hours at 37°C and 5% CO2. Absorbance was measured in a plate reader and plotted against the concentration of TNF-α (Figure 4). The data demonstrates a dose-dependent-decrease in the number of cells in response to TNF-α, indicating a cytotoxic effect.

Lactate dehydrogenase (LDH) is a stable cytoplasmic enzyme which is present in most cells. In culture, damage to (or rupture of) cell cytoplasmic membranes results in the release of LDH from cells into the surrounding supernatant, enabling researchers to measure the number of dead cells by quantifying LDH levels. With this kit, LDH participates in a coupled reaction that converts yellow tetrazolium salt (INT) into a red formazan product (Figure 6). The amount of enzyme activity, measured by absorbance using a plate reader at 490/492 nm, correlates to the number of damaged cells in the culture.

In the first experiment, K562 cells were titrated in 96-well plates in concentrations between 102–105 cells/well. The cells were then either grown in normal media or media containing 1% Triton X-100, a detergent known to disrupt cellular membranes. The reaction mixture from the LDH Cytotoxicity Detection Kit was added to all wells and formazan absorbance at 492 nm was measured on a plate reader (Figure 7). Notably, the concentration of LDH in wells without Triton X-100 was low, indicating little spontaneous cell death. However, in the presence of Triton X-100, LDH release increased proportionally to cell concentration. This indicates the kit can sensitively and accurately detect cell death.

In the next experiment, we modeled cell death as a result of cytotoxic T-lymphocytes (CTLs). H-2b cells (C57BL/6 mouse spleen) were stimulated in vitro with P815 cells (H-2d). Viable CTLs were purified using a Ficoll density gradient, washed, and titrated into a 96-well plate. 1 × 104 P815 test cells/well were added to the effector CTL cells. The cell mixture was centrifuged and incubated for 4 hr. 100 μl of culture supernatant was collected for the LDH assay. Absorbance was measured and plotted against the CTL:P815 cell ratio for the effector cell control (orange), effector-test cell mix (blue), and effector-test cell mix minus effector cell control (red) in Figure 8A. These values were then normalized to calculate the percentage of cell-mediated cytotoxicity of P815 cells in response to CTLs (Figure 8B). Notably, as the ratio of CTLs to P815 cells increased, cytotoxicity also increased and peaked around 80%.