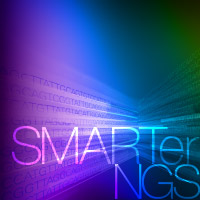 The library input quantities (up to 310 µl of 2.5 nM pooled libraries) required to successfully load a high-throughput sequencer, such as the NovaSeq™ system, are much higher than the quantities (5 µl of 4 nM pooled libraries) required for a low-throughput sequencer like the NextSeq® system. For this reason, increased library yield is becoming a very desirable feature for library prep kits. The SMART-Seq Single Cell PLUS Kit (SSsc PLUS kit) is designed to synthesize high-quality, full-length cDNA directly from from single cells, especially those with low RNA content, and generate a high yield of Illumina-ready sequencing libraries. The kit includes the SMART-Seq Single Cell Kit for generating cDNA, the SMART-Seq Library Prep Kit (not sold separately) for fragmenting the cDNA and amplifying the library, and a unique dual index kit for allowing multiplexing of up to 96 samples (Figure 1, Panel A).

For cDNA generation, the SSsc PLUS kit incorporates our patented SMART (Switching Mechanism at 5′ end of RNA Template) technology. This technology relies on the template-switching activity of reverse transcriptase to enrich for full-length cDNAs and to add defined PCR adapters directly to both ends of the first-strand cDNA (Chenchik et al. 1998). This ensures that the final cDNA libraries contain the entire length of the mRNA, including the 5' end. This strategy maintains a true representation of the original mRNA transcripts, which is a critical factor for gene expression analysis. SMART technology offers unparalleled sensitivity and unbiased amplification of cDNA transcripts, and allows direct cDNA synthesis from intact cells.

For library preparation from the generated full-length cDNA, the SSsc PLUS kit also incorporates our patented library preparation technology. Unlike other library preparation kits, which are based on ligation of Y-adapters, our approach uses stem-loop adapters to construct high-quality libraries. The easy two-step workflow takes place in a single tube and is completed in about two hours. Sample mix-up, other handling errors, and sample loss are minimized since no intermediate purification steps or sample transfers are necessary (Figure 1, Panel B). The SSsc PLUS kit also includes unique dual index (UDI) primers for amplification of indexed NGS-ready libraries, allowing the multiplexing of up to 96 samples. Once purified and quantified, the resulting libraries are ready for use on Illumina NGS instruments using standard Illumina sequencing reagents and protocols.

The SMART-Seq Single Cell PLUS Kit was designed to provide a streamlined workflow from single cells to Illumina-ready libraries. For this experiment, 10 pg of Mouse Brain Total RNA was input into the SMART-Seq Single Cell Kit to generate cDNA in triplicate. Libraries were then produced with the SMART-Seq Library Prep Kit portion of the SSsc PLUS kit or Nextera® XT, a gold-standard library preparation kit, and the performances were compared (Figure 2, Panel A). The library yields obtained with the SSsc PLUS kit were, on average, five times higher than yields obtained when using Nextera XT (Figure 2, Panel B). Next, the libraries were then sequenced on a NextSeq 500, and the number of genes identified with over 0.1 transcripts per million (TPM) was reported (Figure 2, Panel C). The SSsc PLUS kit enabled the detection of more genes than Nextera XT. The percentage of reads mapped to the exonic regions, intronic regions, intergenic regions, ribosomal RNA (rRNA), and mitochondria were identified (Figure 2, Panel D) and found to be comparable for the two methods. Finally, the Pearson and Spearman's correlations calculated from the TPM values were similarly high when comparing the triplicates prepared by each kit (Figure 2, Panel E), indicating high confidence in the reproducibility of the data.

To evaluate any bias introduced by the library preparation step, the same SSsc-generated cDNA was processed in duplicate with the SMART-Seq Library Prep Kit portion of the SSsc PLUS kit or Nextera XT (Figure 3, Panel A). The TPM values were plotted and used to calculate correlations between the replicates. Looking at the SSsc PLUS libraries, the correlations obtained when using the same starting cDNA (P: 0.999 & S: 0.92 for cDNA A1 versus cDNA A2; Figure 3, Panel B, left) were found to be higher than those obtained when using different input cDNAs (P: 0.97 & S: 0.81 for cDNA A versus cDNA B; Figure 2, Panel E). We, therefore, concluded that the main source of variation in the TPM values was coming from the cDNA generation.

We also assessed the different genes identified with SSsc PLUS versus Nextera XT. The Spearman's correlation for these DNA replicate processed with the two different kits (S: 0.91 for SSsc PLUS cDNA A1 vs. Nextera XT cDNA A1; Figure 3, Panel B, right) was significantly higher than correlations for different cDNA replicates prepared with the same kit (0.81/0.82 [SSsc PLUS] & 0.81 [Nextera XT]; Figure 2, Panel E). This high degree of correlation demonstrates the similarity in gene-identification performance between the two library prep technologies. Additionally, as shown in Figure 3, Panel C, the number of genes identified in the replicates of the SSsc PLUS-generated libraries (13,226 genes) was higher compared to those found with the Nextera XT replicates (12,975 genes). Most of the genes identified that did not overlap between replicates showed low TPM values as depicted by the dots overlying the X- and Y-axis of the plots (Figure 3, Panel B). The same 13,059 genes were detected by both kits at similar TPM values as represented by the correlation plot (Panel B) and the Venn diagram (Panel C). Therefore, existing Nextera XT users should see minimal effects on their data when using the new SMART-Seq Single Cell PLUS Kit.

Having a sensitive and reproducible end-to-end approach is crucial to efficiently and easily analyze samples and extract meaningful biological information from the sequencing data. The SMART-Seq Single Cell PLUS Kit combines the proven SMART-Seq cDNA generation approach and user-friendly library preparation chemistry to generate Illumina-compatible libraries ready for sequencing. By using the SMART-Seq Single Cell PLUS Kit, researchers can produce about 5X higher library yields than traditional methods. An increase in the number of genes identified is also observed, which is extremely useful when dealing with cells containing low RNA levels or difficult cells, including clinical research samples.