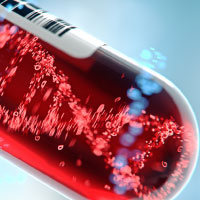 Cell-free DNA (cfDNA), circulating in blood and found in the plasma component, was first discovered in the 1940s (Mandel and Metais 1948) and has been the subject of renewed attention in the research community due to the easy access to its genetic information. The main source of cfDNA is the apoptotic turnover of hematopoietic cells. DNA fragments are generated by the apoptotic endonuclease caspase-activated DNase (CAD) digesting the chromosomal DNA at regular distances in their nucleosomal arrangement around histones, leading to fragments of various sizes. The cfDNA of primary interest exists as fragments of about 170 bp in length.

This genetic information is being used by translational scientists to better understand the progression of cancer. Circulating tumor DNA (ctDNA) derived from malignant tumors is a component of cfDNA, and libraries prepared from these samples contain genetic information of the tumor (Shaw and Stebbing 2014; Patel and Tsui 2015). For example, Murtaza and colleagues at CRUK performed a research study in which cfDNA libraries were prepared following therapy, and the genetic evolution of several metastatic cancers was followed. One of the major limitations of utilizing next-generation sequencing (NGS) with cfDNA is the difficulty of making sensitive libraries from the relatively low abundance of cfDNA obtained from plasma. Concentrations of cfDNA are quite variable, ranging from 1–20 ng/ml of plasma, and the component of interest is fractionally represented.

ThruPLEX technology, which has a history of use in low-input library preparation (Murtaza et al. 2013; Kitzman et al. 2012), has been reformulated and optimized specifically for cfDNA to maximize the library complexity and to preserve the GC representation of the input DNA, with input levels starting at less than 1 ng and ranging to over 30 ng. This new member of the ThruPLEX product line, the ThruPLEX Plasma-Seq Kit, is capable of converting cfDNA into high-complexity libraries for Illumina NGS platforms. The three-step, single-tube workflow yields indexed libraries from purified cfDNA within two hours (Figure 1). The generated libraries can be used directly for whole genome sequencing applications or enriched using a custom panel for the leading target enrichment platforms, including Agilent SureSelect and Roche NimbleGen SeqCap EZ.

In the present study, we demonstrate the performance and reproducibility of the ThruPLEX Plasma-Seq Kit in comparison to KAPA Hyper Prep Kit and NEBNext Ultra DNA Library Prep Kit. Furthermore, we show enrichment data that provides a richer view of the genetic variation within the sample.

There are several library preparation kits for Illumina NGS platforms available, but none have been designed specifically for cfDNA. The ThruPLEX Plasma-Seq Kit can create highly reproducible libraries over a wide input range of cfDNA, from ≤1 ng to 30 ng. Preparation of cfDNA for NGS has usually been done by home-brew kits or kits initially designed to work with mechanically sheared gDNA 200–600 bp in size. Many kits, including the Illumina TruSeq® Nano kit, require a minimum starting amount of 100 ng of DNA, while kits that employ enzymatic fragmentation such as Nextera® DNA Library Prep Kit or KAPA Hyper Plus are not compatible with this type of sample due to the small initial size of cfDNA. In fact, shearing of the cfDNA is unnecessary.

The two kits that were selected for the current test can create libraries from as little as 1 ng (KAPA Hyper Prep Kit) or 5 ng (NEBNext Ultra DNA Library Prep Kit). The ThruPLEX Plasma-Seq Kit is the only kit designed and optimized to efficiently and reproducibly repair, ligate, and amplify NGS libraries from cfDNA. Key to this efficiency and reproducibility for working with DNA fragmented as a result of apoptosis is the use of stem-loop adapters to make libraries, thus eliminating cleanup steps and background problems caused by y-adapters. The ThruPLEX Plasma-Seq Kit also offers several advantages in the workflow when compared to the alternative kits (Table I). Starting with the isolated cfDNA, the ThruPLEX workflow creates indexed libraries in a single tube in three steps in about two hours. No sample transfers or intermediate cleanups are necessary. All components including adapters and indexing reagents are provided with the kit, and no optimization is required. Both KAPA Hyper and the NEBNext Ultra have intermediate cleanup steps; both require the purchase of adapters and/or indexing oligonucleotides that often require optimization of concentration to control the number of adapter dimers and other artifacts. Additionally, for low-input amounts of DNA (<25 ng), KAPA recommends optimizing the adapter concentration.

In GC-bias analysis (Figure 3), the ThruPLEX Plasma-Seq Kit showed well-balanced coverage of the genome between 20% and 70% of GC content. Furthermore, the ThruPLEX libraries showed minimal variability across nine individual plasma samples tested. Identical samples were used to prepare libraries with KAPA Hyper, and there was a lack of coverage in the AT-rich region. A separate set of four samples was used to generate libraries for NEBNext Ultra and those, too, lacked the AT coverage. Since the human genome has an average GC content of approximately 42%, libraries prepared with the ThruPLEX Plasma-Seq Kit best represent the original genetic content of the sample.

To better evaluate the performance of the ThruPLEX Plasma-Seq Kit, libraries were enriched using the Agilent SureSelectXT2 ClearSeq Human DNA Kinome probe set (Cat. # 5190-4676) according to the ThruPLEX SureSelectXT2 protocol in the presence of the Universal xGen Blocking Oligos (IDT). Based on approximately 5M total reads for each sample (Table II), a 600-fold enrichment of the human kinome (panel size 3.2 Mbp) was obtained. At 30X coverage, an average of 77% of bases were covered for the cfDNA samples used in this experiment (Figure 4). Using this data, a highly concordant rate between the replicates for any given sample was found, supporting the ability of the ThruPLEX Plasma-Seq Kit to create libraries that can be used to identify novel allele variants with high efficiency. The identity of the variant calls was confirmed by identifying 98–99% of single-nucleotide polymorphisms (SNPs) in the dbSNP database (Table II). The other 1–2% were novel calls that were generally common to all three replicates of each plasma DNA sample, supporting their biological validity.

The ThruPLEX Plasma-Seq Kit was specifically developed to produce high-quality libraries from cfDNA. Both the repair and ligation reactions have been reformulated to provide superior results with cfDNA. The optimized repair reaction ensures that the ends of each fragment are blunt and polished to provide high ligation efficiency. Likewise, the ligation reaction has been enhanced for cfDNA molecules to provide maximum ligation of the stem-loop adaptor. The elimination of an intermediate cleanup step and the lack of transfer steps minimize loss of molecules, augmenting the formulation changes to provide this cfDNA-specific product. Our data indicate that the ThruPLEX Plasma-Seq Kit yields better libraries in comparison to its competitors, in terms of diversity, GC bias, and duplicate rates. These libraries are suitable for targeted enrichment and will provide a sensitive tool to allow scientists to easily access and analyze the genetic content of samples from a variety of experimental conditions.

Plasma collection was performed by Medical Research Networx, LLC. Blood was collected into BD Vacutainer EDTA tubes and inverted 10 times to mix. Vacutainer tubes were centrifuged (4°C; 12 min; 1,500g) with the centrifuge brake off. The plasma layer was then removed, taking care not to disturb the buffy coat, and placed into a 15 ml conical tube. The samples were then centrifuged again (4°C; 12 min; 1,500g) before transferring the plasma to a new tube, leaving approximately 0.5 ml to minimize leukocyte carry over. Processed plasma samples were stored at –80°C until DNA was extracted.

Qiagen QIAamp Circulating Nucleic Acid Kit was used according to the manufacturer's protocol without the use of carrier RNA to isolate cfDNA from 5 ml aliquots of plasma samples.

Libraries were prepared from the cfDNA samples following the manufacturer's instructions using the ThruPLEX Plasma-Seq Kit with dual indexes, the NEBNext Ultra DNA Library Prep Kit (New England Biolabs) with dual indexes, and the KAPA Hyper Prep Kit (KAPA Biosystems) with Roche Nimblegen SeqCap EZ adapters diluted to concentrations as recommended in the KAPA protocol for different input amounts. Amplified libraries were pooled and then purified using AMPure XP beads (Beckman Coulter) and eluted in 30 μl of low TE buffer for whole genome sequencing (WGS) or 50 μl of ultrapure water for enrichment. Purified libraries were assessed on the Agilent BioAnalyzer and quantified by qPCR using the KAPA Library Quantification Kit from Bio-Rad Laboratories (KAPA Biosystems). Two WGS experiments and a kinome enrichment were performed (see Table III). For the first, libraries were prepared from three individual plasma samples at input amounts of 0.1 ng, 1 ng, and 30 ng. The amount of mononucleosomal DNA in each sample, as measured by the Bioanalyzer, was 0.09 ng, 0.62 ng, and 15.44 ng. In the second WGS experiment, nine individual plasma samples were tested. cfDNA from a 1 ml aliquot of plasma sample was used to prepare each library; input amounts ranged from 5 ng to 40 ng. For the kinome sequencing experiment, two individual plasma samples were used at input amounts of 6.5 ng and 10 ng, in triplicate.

Hybridization and capture of the indexed libraries were carried out using the SureSelectXT2 ClearSeq Human DNA Kinome Panel. Briefly, six indexed ThruPLEX Plasma-Seq libraries, hybridization buffer mix, blocking mix, RNase block, and the ClearSeq Kinome Panel were combined according to the SureSelectXT2 protocol. In addition, 1 μl (1 nmol) each of i5 and i7 xGen Universal Blocking Oligo - TS HT (Integrated DNA Technologies) were added into the hybridization reaction which was carried out for 48 hours. Target capture, washes, and final amplification of the enriched libraries were performed according to the SureSelectXT2 protocol to obtain captured libraries ready for Illumina sequencing.

Sequences were analyzed on the DNANexus platform. Reads were aligned to the human genome, hg19, using the Burrows-Wheeler Algorithm, BWAMEM6, to generate BAM files. For WGS data, reads were first down-sampled to equal numbers across all samples. Down-sampled BAM files were assessed using Picard Mark Duplicates7 to count duplicate reads and estimate diversity (estimated library size), and Picard Collect GC Metrics was used to determine biases based on sequence GC content. For kinome sequencing data, after mapping with BWA-MEM, Picard CalculateHsMetrics was used to determine capture quality metrics. For SNV analysis, Agilent SureCall was used to identify variants within the targeted exons of the kinome, and Illumina Variant Caller was used to annotate variants.

Broad Institute. Picard Tools - A set of command line tools (in Java) for manipulating high-throughput sequencing (HTS) data and formats such as SAM/BAM/CRAM and VCF. <http://broadinstitute.github.io/picard/>

See what our customers are saying about ThruPLEX Plasma-seq technology!

"Your ThruPLEX Plasma-seq kit is the easiest to follow and has the most streamlined protocol (importantly with the fewest clean-up steps). We successfully made libraries from 1 ng input in this trial."
—Dr. Charlie Massie, UNIVERSITY OF CAMBRIDGE

cfDNA isolation from up to 10 ml of plasma