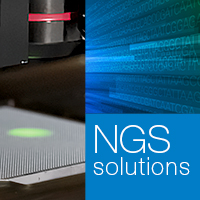 The ESHG annual meeting gathers scientists from around the globe to present the latest advances in human genetics. During the 52nd annual European Human Genetics Conference (2019) we discussed our tools for genetic analysis research, including our gold-standard SMART-Seq Stranded and PicoPLEX Gold chemistries for single-cell RNA- and DNA-seq, respectively. We invite you to review our materials from the meeting and reach out to us with any questions or requests regarding these technologies via the "talk to us" link below. 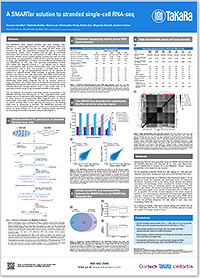 Since the emergence of next-generation sequencing (NGS), the importance and demand for single-cell analysis have risen rapidly. Single-cell RNA-seq generates data for various analysis methods such as differential gene expression, alternative splicing, gene fusion identification, and so on, which allow for cell profiling in great detail. As a result, single-cell RNA-seq has been gaining prominence not only in basic research fields but also in clinical fields. Extracting meaningful biological information from the small amount of mRNA present in each cell requires a library preparation method with exceptional sensitivity and reproducibility. The SMART‑Seq v4 Ultra Low Input RNA Kit for Sequencing offers the most advanced single-cell RNA-seq method on the market, in part due to its incomparable capability to retrieve information from full-length mRNA and not just the 3' end. However, this method can only capture polyadenylated mRNA, and thus works best with high-quality RNA and cells. In addition, it does not preserve strand-of-origin information. To address these problems, we have further modified our SMART RNA-seq technology to create the SMART‑Seq Stranded Kit, a single-cell-capable workflow that relies on random priming instead of oligo(dT) priming, hence capturing any RNA regardless of polyadenylation status. The SMART‑Seq Stranded Kit preserves the strand-of-origin information, making it more amenable to distinguishing overlapping genes and for comprehensively annotating and quantifying lncRNAs. The SMART‑Seq Stranded Kit offers a workflow that delivers a more accurate representation of the single-cell transcriptome than is achievable with current methods. 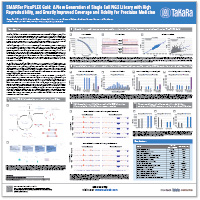 Accurate, reproducible detection of mutations and copy number variations (CNV) from small amounts of DNA, including single cells and fixed tissue, is key for genetic analysis of clinical samples to assist in identifying the best treatment regimen and molecular diagnoses of diseases such as cancer. Increasing demand for genetic analysis from limited samples, including single cells, has created an increasingly unmet need for technologies that allow for economical and accurate analysis of those samples.

A primary application for single-cell analysis is Preimplantation Genetic Testing (PGT). PGT has grown dramatically in the last ten years, enabled by improvements in the array and sequencing platforms, as well as by the patented SMARTer PicoPLEX WGA (PicoPLEX) quasi-random priming technology—the international gold standard for whole genome amplification (WGA) for subsequent detection of CNV in fixed or unfixed single cells. Initially, PicoPLEX chemistry was optimized to allow for reproducible detection of aneuploidies and CNVs in embryo biopsies. The original versions of the technology are not optimized for other applications such as genetic analysis in cancer screening, diagnosis of disease, or therapeutic drug monitoring due to the frequency of false-positive mutation rates.

To address the need for accurate detection of single nucleotide variants (SNVs), we enhanced the PicoPLEX chemistry using optimized enzymes, primers, and protocols that improve sequencing coverage, uniformity, and accuracy while increasing the resolution for CNV detection and retaining reproducibility. This enhanced chemistry named SMARTer PicoPLEX Gold Single Cell DNA-Seq Kit (PicoPLEX Gold) is a single-cell library-prep kit with a simple, four-step protocol to convert fixed or unfixed single cells into NGS libraries in under three hours with minimum hands-on-time.

A novel protocol that enables the detection of both SNVs and CNVs from 1-5 cells in a single, low-pass sequencing run that saves time and money.